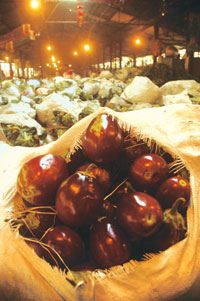 TO OVERCOME a setback in the Bt brinjal biopiracy case, the biodiversity authorities have decided to challenge the stay order on criminal proceedings against three of the accused, who are associated with University of Agricultural Science in Dharwad, Karnataka.

On January 3, just two days ahead of the hearing of the case, the university’s registrar H S Vijaykumar, vice-chancellor R R Hanchinal and former vice-chancellor S A Patil had obtained the six-month stay from the Dharwad Bench of the Karnataka High Court.

Talking to Down To Earth, KBB member secretary K S Sugara said, “On January 5, when I, along with an NBA official, went for the hearing, we were surprised to know that a stay order was issued in the case. We were not informed about the development.” Sugara said this has hit their case. So after discussions, we decided to challenge and vacate the stay. A senior NBA official, who is closely associated with the case and did not wish to be quoted, confirmed the development. “Our inquiry following the January 5 incident revealed that during a hearing of the case last year the court had issued orders to serve summons to the companies and university officials involved. But summons were issued only to people concerned with the university. The court officials could not find officials associated with the companies for delivering the summons.”

It took the authorities nearly two years to investigate allegations into the biopiracy of Bt brinjal. It is the first biopiracy case filed in India. Before filing petition in November last year, KBB had held a discussion on September 22. The board members had decided in the meeting that deputy conservator of forests (DCF), Bengaluru, and DCF of Dharwad forest division, would act as co-complainants in the case along with officers of the National Biodiversity Authority. They were investigating officers in the case. However, the two officers were issued transfer orders just a few days before the board filed the petition.

Documents available with Down To Earth show DCF Y Chakrapani was transferred on November 5, 2012, with immediate effect and was posted as DCF Raichur territorial division. A similar order was issued against deputy conservator of forests, Dharwad.

Karnataka State Forest Department officials say everyone knew that the two officers will play a crucial role in fighting the judicial case. Yet neither the principal secretary nor the forest minister C H Vijayshankar, who is also the chairperson of KBB, intervened. No other DCF was transferred during this period. Officials add that though Sugara tried to hold back the transfer orders, he could delay it only for a month.

Sources in KSBB and NBA allege it is the first criminal case of bio-piracy in India, so there is a lot of pressure from politicians and the forest department as well as from the board members to weaken the case. It involves high-profile companies and academicians.

The case could become a precedent for the rampant bio-piracy across the country. But the way the authorities are handling the case, it seems there is no will to win it despite KBB and NBA having strong evidences.