It was caused by H5N1 virus, confirm laboratory tests; culling to end Monday 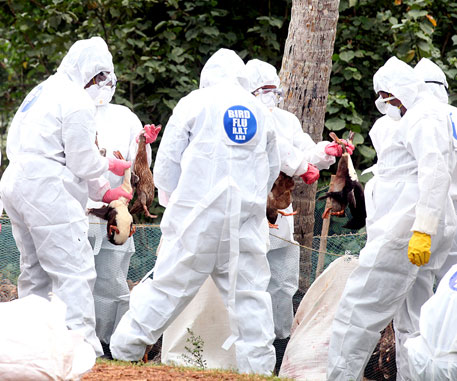 The bird flu outbreak in Kerala, which was confirmed to be caused by the deadly H5N1 virus, is under control. Though the avian influenza was caused by the highly contagious H5N1 strain of virus, which can be fatal to humans, no person was found to be infected with the virus, said state agriculture minister K P Mohanan in Thiruvananthapuram after a review meeting held on Sunday.

He also said the first round of culling of birds would end Monday.

The outbreak was reported last week in Kuttnad region in central Kerala after some 20,000 ducks died of the disease. Kuttanad, a major rice growing region, is spread over three districts—Alappuzha, Kottayam and Pathanamthitta. The region has about 600,000 ducks. The avian influenza and the subtype of the virus were confirmed following lab tests at the National Institute of High Security Animal Diseases, Bhopal.

The government had formed a rapid action force for culling the birds. About 185,000 birds have already been culled and the figure will go up to 250,000, said the minister. The highest number of birds, about130,000, were culled in Alappuzha district, followed by Kottayam (6,000) and Pathanamthitta (5,000).

To find out whether humans have been infected by the virus, the health workers visited 88,120 houses and 300,000 people were examined. A separate isolation ward had been set up at Kottayam and Alappuzha Medical College hospitals, said state health minister V S Sivakumar, who was also present in the review meeting. The government would draft an action plan for preventing spread of the virus through water bodies.

Apart from the earlier announcement of providing compensation to the owners of birds that are culled, the meeting also decided to provide compensation for the birds that died of the disease before the confirmation of the outbreak. A total of Rs 84 lakh has been disbursed as compensation till now.