But with better delivery systems and institutional reforms 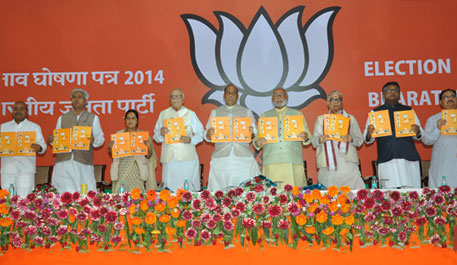 The much-delayed manifesto of the Bharatiya Janata Party (BJP), released on Monday, pretty much repeats what others political parties like the Indian National Congress and Aam Aadmi Party (AAP) have promised in their manifestos.

The manifesto recognises the Congress-led UPA government's rights-based development approach, but points to its failure to deliver on all promises. The BJP manifesto promises to instill faith in economy, governance, and better work culture.

Like the AAP manifesto, the BJP manifesto also talks about institutional reforms of judiciary, police and electoral processes.

It may be recalled that the previous UPA-I government has already initiated a project for development of 250 identified backward districts in 2007 to minimise regional imbalances.

Rural development: one up on Congress

The manifesto also promises to encourage cleanliness and sanitation with efficient waste and water management Infrastructure. It says if the party comes to power, it will identify model towns for rolling out integrated waste management infrastructure.

The BJP will ensure profitability of agriculture by ensuring a minimum of 50 per cent profit over cost of production by lowering cost of agriculture inputs, introducing latest technology for farming and high yielding seeds.

The manifesto promises to set up an “Organic Farming and Fertilizer Corporation of India” for promotion of organic farming and fertilisers and provide incentives and support for marketing produce.

Like the Congress, the BJP manifesto also talks of allowing genetically modified (GM) foods, but after scientific evaluation.

Vision for better land management: The manifesto claims the party will adopt a “National Land Use Policy”. It will provide for scientific acquisition of non-cultivable land and its development, protect interest of farmers by keeping food production goal in mind and aid better land management.

The manifesto promises to encourage social forestry and proposes a separate mission for development of Himalyas—national mission on Himalyas—with separate funds for Himlayan sustainability and a university dedicated to Himalayan technology.

The BJP says it will ago ahead with previous NDA government's pet project—the controversial river-interlinking project. It also proposes to launch a people's participation programme for cleaning rivers like the Ganga under a countrywide “clean river programme”.

The manifesto also promises a national mission on irrigation for providing water to every field and also setting up of drinking water supply grid in water-scarce areas and also provide piped water to all households.

There is nothing new in the BJP manifesto on health when compared to what has been promised by AAP and Congress.

The BJP manifesto promises to open AIIMS-like institutes in each state and also to extend ambulance services available on dialling toll-free number 108 to all states.

The UPA government, incidentally, has been extending the services in a phase-wise manner. The emergency ambulance service has been  launched in 15 states so far. Congress-led UPA II has also established AIIMS in six states in addition to the one in Delhi.

The BJP manifesto has promised to provide for all through “health assurance” and reduce out-of-pocket spending on healthcare, but it has not clarified what percentage of GDP it will spend on health if it comes to power. It has been a long-standing demand of health activists and experts that the government should spend at least three per cent of its total GDP on public healthcare.

Given this lack of clarity, BJP's claim of dealing with malnutrition, healthcare for the elderly people, and sanitation rings a little hollow. The manifesto promises a new health policy, modernisation of government hospitals, upgrading infrastructure and also use of latest technologies.  It also promises to reogranise the Union Ministry of Health and Family Welfare in order to converge various departments dealing with healthcare, nutrition and drugs.

Indian National Congress: manifesto for the Lok Sabha Elections, 2014 (Your voice, our pledge)