BJP parliamentarians back out of Monsanto-sponsored US tour

The delegation was to leave for the US on Saturday, according to media reports 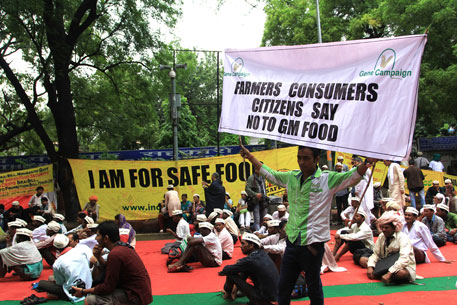 The Bharatiya Janata Party which has been under pressure from RSS and its affiliated organisations  not to go ahead with field trials of genetically modified (GM) crops, found itself in a spot after media reports said that BJP and Shiv Sena members of Parliament (MPs) are being sponsored by seed giant Monsanto for a one week study tour.

The party was quick to swing into firefighting mode. BJP spokesperson Ram Madhav announced on twitter: “No BJP MP will be a part of the delegation sponsored by Monsanto.”
The MPs were scheduled to leave India on August 23.

According to available information, the group of MPs was to attend Farm Progress show to be held from August 26 to August 28 at Boone in Iowa State of the United States. It is the largest outdoor farm event in the US, hosted annually, where 600 exhibitors from across the world display new farm equipment, tractors, combines and farm implements, and seed and crop protection products in addition to farm supplies and services.

After this event, the MPs were supposed to visit global seed giant Monsanto’s headquarters in St Louis at Missouri. The news report stated that the cost of travel per parliamentarian was around $6,000 and would be borne by the company.

The group included two MPs from Shiv Sena from Maharashtra, two from Andhra Pradesh, four from Bihar and Uttar Pradesh and one from Gujarat and Rajasthan. Despite repeated attempts the BJP MPs who were part of the trip could not be contacted.

Such trips are a part of the usual industry practice of taking farmers, industry experts, mediapersons and MPs. The timing of this trip seems to be crucial as the BJP-led NDA government Indian government has still not made clear its position on GM crops.

While Union minister of state for environment, Prakash Javadekar, said that the decision on GM crops would be taken on scientific basis, the Rashtriya Swayamsevak Sangh (RSS), through its organisations like Swadeshi Jagran Manch and Bharatiya Kisan Sangh, has been protesting against any clearance to GM crops.

On July 29, the Genetic Engineering Appraisal Committee (GEAC), the apex body to take decisions on GM crops in India, had allowed trials for various food crops like brinjal, mustard, rice, maize, sorghum and chickpea. Most of these trial requests, that have been cleared, are from public research institutions.