Soot particles are causing intensive droughts and floods in China 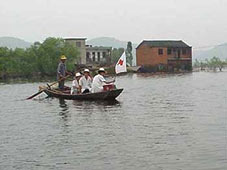 large amounts of soot particles and other pollutants are causing adverse changes in precipitation and temperatures over China, indicates a new research done by Washington dc-based National Aeronautical Space Administration (nasa). The soot is partially responsible for the increased incidences of floods and droughts witnessed by China during the last several decades, assert nasa researchers Surabi Menon and James Hansen.

Using nasa Goddard Institute for Space Studies' climate computer model and aerosol data from 46 ground stations in China, Menon and Hansen conducted four sets of computer simulations to monitor the effects of black carbon on the hydrological cycle of the country. In the simulations, they isolated specific factors such as sea surface temperature, levels of other greenhouse gases and aerosols, and then analysed whether changes in these factors were responsible for hydrological cycle alterations.

They found that out of the four scenarios, the effect of increased amounts of soot over southern China was responsible for both the tendency towards flooding that has been occurring in the region and the increasing droughts in northern China. "If our interpretation is correct, then reducing the amount of soot may help diminish the intensity of floods in the south and droughts in the northern areas of China, in addition to having human health benefits," says Hansen.