As ocean waters get warmer, coral reefs look even paler this year 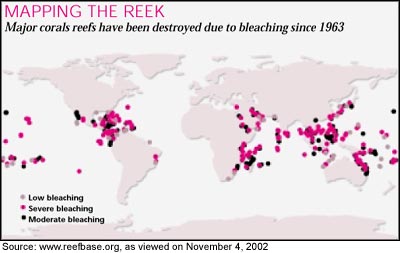 with sea temperatures increasing, the world's coral reefs are once again facing threat as shown by intensive bleaching. Data from a new information system, called ReefBase, shows that 2002 is the second worst year for coral bleaching after 1998, when a very strong episode of the El Nio weather phenomenon caused irreversible damage to the reefs.

This year, scientists have already recorded 430 cases of bleaching. The worst hit place so far is the Great Barrier Reef of Australia. Other affected areas include the Philippines, Indonesia, Malaysia, Japan, Palau, Maldives, Tanzania, Seychelles, Belize, Ecuador and Florida. Overall, 20 countries in all the major oceans have been affected till now. Moreover, the phenomenon has shown an increase in frequency and intensity.

The researchers say it is too early to determine the level of mortality. "However, based on previous events we can expect a significant number of reefs to suffer loss of corals which could take many years to replace," said Jamie Oliver, project leader of ReefBase. "A lot will hinge on further bleaching events," said Meryl Williams, director-general of the WorldFish Centre in Penang, Malaysia.

With bleaching incidences becoming quite frequent, concern about their vulnerability to global warming has grown sharply. A widely cited 1993 report, based mainly on anecdotal evidence and small sample of reefs which had been assessed scientifically, asserted that 10 per cent of the world's reefs were dead and that another 30 per cent were likely to die by 2012. However, another study published in 2000 painted an even more scary picture by stating that 27 per cent of the world's reefs have been lost, including some 16 per cent that were severely damaged during the 1998 El Nio. Another 14 per cent are expected to die over the next decade and a further 18 per cent would perish between 2010 and 2030 unless comprehensive efforts are made to protect them.

Since adverse effects of global warming cannot be immediately countered, actions to save the reefs should be centred around making them protected zones. Practices such as fishing with explosives or cyanide should also be banned. Saving measures also include preventing the run-off of sewage and fertilisers, which spur the proliferation of algae that then choke the reefs.

Taking these steps is a must for countries like India, where coral reefs are on the verge of extinction. Marine pollution and global warming have played havoc with the country's coral reefs. According to latest data, following percentage of corals have been bleached in India's main reef areas: 80 per cent in Lakshadweep, 60 per cent in Gulf of Mannar and 30 per cent in Gulf of Kutch.

Despite the Union ministry setting up a unit to monitor the situation, most scientists believe that complete coral recovery is not possible as the government has failed to stop industries from polluting oceanic environment.