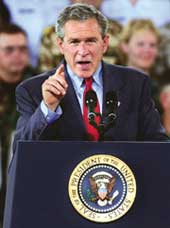 us president George W Bush on July 19 used his veto for the first time blocking a popular bill that would have expanded federal funding for embryonic stem cell research. "It crosses a moral boundary that our decent society needs to respect, so I vetoed it," Bush said at a White House event. In 2001, Bush had vowed to veto the bill because of his deeply held belief that destroying human life is wrong, even in its earliest form and in interest of research that could lead to potentially life-saving medical breakthroughs. A few hours later, the us senate voted to overturn Bush's veto, but the bill's supporters did not appear to have the required majority, which means the bill stands almost no chance of making it into law this year. Supporters of the bill are, however, determined to give federally-funded researchers access to more embryos to further the embryonic stem cell research, which could lead to cures for illnesses such as cancer, Parkinson's and Alzheimer's diseases.