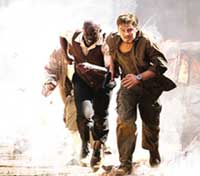 IN the 1953 film Gentlemen Prefer Blondes, Marilyn Monroe claimed diamonds were a girl's best friend. But Hollywood's honeymoon with diamonds is over. A new movie, Blood Diamond, shames the diamond business in Sierra Leone. Directed by Academy award winner Edward Zwick, it plays out against the backdrop of Sierra Leone's 1991-2002 civil war, fuelled by trade in illicit stones.

The film has opened to mixed reviews. But it has got the diamond industry worried. In fact, a year before Blood Diamond's release, Jonathan Oppenheimer, head of the diamond major De Beer's South African operations, warned that the movie could undermine efforts to maintain the image of its diamonds as "untarnished".

"In Sierra Leone, diamonds are coming under legitimate control," says Rory Anderson, an expert on the illegal diamond trade."But there are still countries, where diamond warlords use proceeds to fund conflicts," he notes.