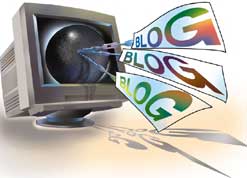 On July 13, the Union ministry of communications (moc) banned access to 17 web sites and blogs on grounds that "they preach messages of religious hatred". In the scramble to obey the order, some Internet service providers simply blocked users from looking at entire domains preventing access to thousands of blogs, or online web journals, hosted there. moc officials say that they instructed Internet service providers, whom they licence, with a list of sites to be blocked in the interest of security. The ban was imposed two days after the Mumbai train blasts. But Gulshan Rai, director, moc told the news agency Reuters that the order was not a response to the attack.

Bloggers reacted with outrage. "If this isn't censorship, I don't know what is," wrote Neha Viswanathan at www.withinandwithout.com. Bloggers were quick to post simple methods for skirting the ban, including accessing some banned sites through pkblogs.com, a site designed for people whose blog is "blocked in India, Pakistan, Iran or China". And with the banned web sites' addresses splashed on newspaper front pages, many pointed out that the ban would have the opposite effect to the one intended.

"The ban is just bringing more attention to these sites which can be accessed anyway," Delhi-based blogger Shivam Vij (www.shivamvij.com) told Reuters. "Before the ban most of us hadn't even heard of these sites. There is no proven evidence of their provoking violence, it's just paranoia," he added.

Once the impracticability of the ban became apparent, the ministry rescinded its decision.