Among other things, panel has suggested joint ventures with foreign companies and transfer of technology be taken up for exploiting waters more than 500 m deep 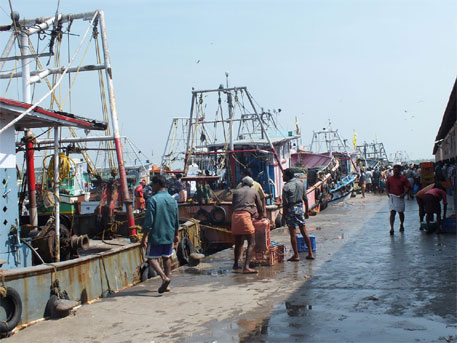 The seven-member expert committee headed by B Meenakumari, deputy director general of fisheries division of the Indian Council of Agricultural Research (ICAR), was constituted by the Department of Animal Husbandry, Dairying and Fisheries Department of the Ministry of Agriculture after Prime Minster Narendra Modi’s call for a “Blue Revolution” in July this year. Speaking at the Foundation Day programme of ICAR, Modi said that just like the “Green Revolution” and “White Revolution”, there was a need for a Blue Revolution to enhance the country’s marine resources management and utilisation. The committee was entrusted with the responsibility of a comprehensive review of deep sea fishing policies and guidelines and give recommendations, which it submitted to the government on August 20.

The committee estimated the resource potential of the Exclusive Economic Zone (EEZ)— sea between 22 and 370 km from the coast—at 4.41 million tonnes and suggested its optimal utilisation. “The recommendations were shaped without consulting the stakeholders. It is a conspiracy to let foreign monopolies exploit our fisheries resources,” says Charles George, president of Kerala’s Matsya Thozhilali Aikya Vedi (forum of fisher’s unions). “The recommendations are detrimental to the interests of hundreds of thousands of fishers in Kerala,” he adds.

Eye on deep sea fish
What has angered the fishers’ and boat owners’ groups is the committee’s categorisation of the utilisation of resources according to the depth of the waters. The committee observes that waters up to 200 metres (m) are already exploited and some species in these have been overexploited. “Thus, there is no expansion of fishing efforts in this zone,” the committee remarks. As for waters at a depth of 200-500 m, small fishing boats measuring 15-20 m in length have started utilising the resources. According to the committee, beyond a depth of 500 m, marine resources are not optimally utilised and there is considerable scope for expansion in this zone, mainly for tuna and tuna-like species.

To achieve optimum utilisation of the resources from these waters, the panel recommends that 1,178 deep-sea fishing vessels be deployed. This includes the existing and additional 270 vessels. The panel also suggested that joint ventures with foreign companies and transfer of technology be taken up for exploiting the waters beyond 500 m depth. “The panel totally ignores the fact that Indian fishers are already operating in waters beyond 500 m and landing catches,” says Joseph Xavier Kalappurackal, general secretary of the All Kerala Fishing Boat Operators’ Association on August 21.

The panel further observes that India lacks adequate expertise or resources to exploit beyond 500 m and hence technology transfer through acquisition of foreign fishing vessels and/or joint ventures and leasing in vessels need to be considered.

Earlier panel had said no to joint ventures
"This is nothing but the same old policies of 1991, which allowed joint ventures and taking foreign vessls on lease," says George. He further points out that the Murari Committee, appointed by the Centre in 1996 to review the fisheries sector had made 27 suggestions to revamp the sector. The Centre had accepted 21 recommendations. "The committee has recommended that no joint venture with foreign companies should allowed in the Indian waters, and the permits given

for such ventures, chartering and leasing in foreign vessels and test fishing should be cancelled immediately. The committee had also recommended no renewal, extension or new licenses and permits be issued in future for such ventures in the interest of the mechanized Indian boats," says George. But these recommendations were never implemented. In 2004-2005, the Centre decided to allow Indian registered big ships to fish in the Indian waters. "These vessels in fact belong to foreign companies," alleges George.

Boost for big vessels leased by Indian firms
The panel also recommends to reconsider and liberalising stringent conditions imposed by the Union Ministry of Home Affairs on big fishing vessels operating in Indian territorial waters, like fixing specific percentage for foreign crew on board, phasing out of the number of foreign crew, engaging Indian workers, paying them a salary not less that US $ 25,000 a year.

Fishers and boat owners groups feel these recommendations are to help big Indian business houses such as Tata, ITC and Dunlop that have floated companies and are venturing in fishing sector by leasing in big vessels with crew from countries such as Russia, Japan and Korea. "These companies have collaborated with American and European food companies.

The fishers groups say the recommendations would affect Kerala the most, which has about 3,500 trawlers. Different associations have planned to let the Centre know about their protests.