As climate talks at Bonn near conclusion, participating countries finally came to an agreement and adopted the agenda of the Durban Platform. Consensus on the agenda had seemed almost elusive over the course of the past two weeks of negotiations. 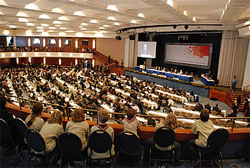 Bonn saw parties from 195 countries negotiating the most appropriate and politically feasible means to address climate change under three different tracks simultaneously—Kyoto Protocol (KP), Long-term Cooperative Action (LCA) and the Durban Platform for Enhanced Action (ADP).  The last one is based on the text adopted at the Durban Conference of Parties (CoP) last year; the Durban Platform binds all parties for the first time to climate targets. The other two are existing arrangements under the Kyoto Protocol and Bali Action Plan that differentiate between responsibilities of developed and developing countries based on their historical greenhouse gas emissions.

Parties had found it particularly challenging to agree to an agenda or a work plan on what should be discussed under the Durban Platform (see 'Durban action plan gets stalled') because of low level of trust between parties which were split over whether the agenda was just a “procedural issue” or a matter of substance and scope.

With just a day left to go, parties had been invited to yet another open-ended informal consultation open to any party that chooses to attend. Lack of consensus at these meetings had led to the cancellation of two plenary sessions, but eventually, agreement on some issues on the agenda had been reached, increasing hopes that it could finally be adopted. According to an Earth Negotiations Bulletin update, “After 9 pm, a group of relieved delegates emerged and reported that agreement on the ADP agenda had been reached.” (The Earth Negotiations Bulletin has been covering multilateral negotiations on environment and development for the past 12 years).

Meanwhile, the other two tracks—the LCA and KP—were adjourned a day ago. These discussions moved forward on some issues, but will nevertheless carry forward a “large amount of work.”