The good thing about this book is that it makes a clear attempt to scale down the shrill rhetoric of the gm debate. The sharp language and aggressive defence, seen in many publications on GM technology and GM crops, are missing. However, the arguments are more or less the same: alleviating world hunger, benefits to the poor and superior research targeting superior goals. These can be easily challenged 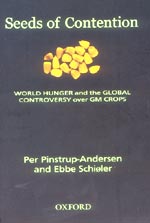 Seeds of Contention: World Hunger and the Global Controversy over GM Crops by Per Pinstrup-Anderson and Ebbe Schioler OUP 2003

The good thing about this book is that it makes a clear attempt to scale down the shrill rhetoric of the gm debate. The sharp language and aggressive defence, seen in many publications on gm technology and gm crops, are missing. However, the arguments are more or less the same: alleviating world hunger, benefits to the poor and superior research targeting superior goals. These can be easily challenged.

It is not that gm technology will never deliver anything for the poor and hungry, its just that it is not doing so at present. Think: why is gm technology better accepted in the field of healthcare than food? Because it has direct and tangible consumer benefits. In the case of food, benefits are neither direct nor visible. Also, seed corporations appear to be the primary beneficiary of gm technology.

Agricultural biotechnology research is being carried out primarily in developed countries by the private sector. This research is aimed at needs of farmers in developed (not developing) countries, and rich rather than poor farmers. Hence the superior research is not targeting goals that would alleviate hunger. The book explains how gm technology can contribute to solving the problem of world hunger. A fine theory, but difficult to support through evidence. At the moment the principal gm crops available are soybean, corn, cotton and canola, which is a form of mustard. Soybean and corn are intended primarily for animal feed. The corn is also for high fructose corn syrup (a sugar substitute). But developing countries need other crops: more legumes, cassava, millets or fodder. Not many of these are the focus of gm technology at present.

The two dominant traits that gm technology offers are insect (Bt) resistance and herbicide tolerance. Both traits cater to mechanised agriculture in industrial countries, where farm labour is practically non-existent. In 2002, over 75 percent of the global acreage of gm crops was devoted to herbicide tolerance, about 17 percent to insect resistance and another 7.5 percent to a mixture of the two. Herbicide tolerance allows large-scale spraying of a herbicide to destroy weeds on large farms measuring a few thousand hectares. In India this trait is highly undesirable. Weeding provides wage labour and the 'weeds' are either nutritious greens for the cooking pot or additional fodder for livestock. As a matter of fact, herbicide tolerance as a trait should not be permitted in India and other agricultural developing countries. The needs of developing countries, rather, are traits like drought tolerance and salt tolerance that would enable crops to grow in arid and saline soils. But where's the research?

In chapter three of the book, the authors make the case that to feed the growing world population, agricultural productivity has to increase and this cannot be done through existing practices. Ergo, gm technology will be necessary. But gm technology is not even targeting increased food production. Also, there are other ways to better agricultural productivity. Take India, where over half the agricultural lands are rainfed and capable of producing only one major crop. Better water management can immediately make a second crop possible in such areas. Increased availability of water is guaranteed to give success, whereas the gm route is long, expensive, and uncertain. It also raises questions about the safety of human and animal health and the environment. So what should a developing country choose ?

This book relies on all the old clichs regarding gm technology. It doesn't tackle the problems of the technology, and so fails to convince. A more appropriate discussion should have included vexing questions, such as the problems arising from the implementation of stringent intellectual property rights on the processes and products of gm technology, including even research tools which makes this technology largely inaccessible to resource-poor farmers. The reader would have benefited from a more nuanced discussion on what potential gm technology had to address the problems of developing countries and what needed to be done at the level of research and implementation.