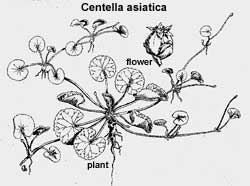 with scientists at the Lucknow-based Central Drug Research Institute (cdri) rediscovering a herb that is prescribed traditionally for every malady -- from falling hair to failing memory -- drug manufacturers seem to have hit a goldmine. Brahmi, the herb used extensively in Ayurveda for curing a range of illnesses, has been repackaged, encouraging drug manufacturers to make a fast buck.

Botanically, there are two contenders to the name Brahmi-- Bacopa monnieri and Centella asiatica. The scientists claim that the herb can enhance memory astoundingly and energise the brain. "The immediate effect may be seen within four to six days by increased brain energy, which one may experience by being fresh and tireless through the day," claims Rajkumar, the Chennai-based manufacturer of the elixir, who has licensed the cdri technology.

But such claims seem too tall considering that the drug has been tested only on rats. The cdri scientists had tested the animal's abilities like 'brightness discrimination' and 'conditioned avoidance response and test aversion'. According to experts, such tests take into consideration many other aspects of performance along different parameters besides merely learning and memory. As these tests are dogged by many ambiguities, applying them to humans seems too far-fetched.

Naturally, apprehensions prevail over marketing the drug for human consumption. Even as anecdotal wisdom about Brahmi's memory-boosting power is accepted, the question remains whether the new elixir can actually "increase the synthesis of protein cells in the brain; treat memory disorders like dementia associated with Alzheimer's disease and age-related memory loss, and counteract amnesia induced by stress and sleep deprivation".