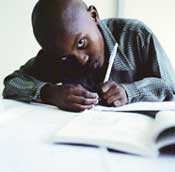 Students from sub-Saharan Africa are the most mobile in the world, with one out of every 16 studying abroad, according to a report from the unesco Institute for Statistics (uis). The Global Education Digest 2006 presents the latest education statistics from primary to tertiary levels in more than 200 countries.

Between 1999 and 2004, the number of mobile students worldwide surged by 41 per cent from 1.75 to 2.5 million, according to the Digest . This does not mean that more students are travelling. Rather it reflects the rapid expansion of higher education overall, with tertiary enrolments also increasing by about 40 per cent during the same period.

"What this report shows is that the real dynamics in tertiary education is coming from African, Arab and Chinese students," says Hendrik van der Pol, uis director.

Meanwhile, academic groups in the uk have expressed concern over the growing brain drain of African researchers and professionals. "'It is difficult to put numbers on those leaving as statistics are difficult to come by, but we know that there is a net flow of academic skills away from Africa," said Brian Everett, assistant general secretary of the Association of University Teachers in Britain. The un Economic Commission for Africa suggests that Africa lost 60,000 professionals (such as doctors, university lecturers and engineers) between 1985 and 1990. But recent figures aren't available.

"The consequence of the drain is that losing nations do not have the skill base to educate their young people and develop their own economies," Everett said. "'They, therefore, either falter or become open to privatised education providers who operate on a for-profit basis and who hold different values particularly in relation to academic freedom and research."