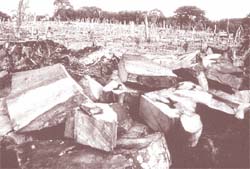 Military personnel of at least 32 Latin American and Caribbean nations may soon get training from members of the us armed forces to guard rainforests, protect endangered species and undertake a variety of other environmental tasks. The us soldiers will teach their Latin American and Caribbean counterparts various ways of guarding Brazilian rainforests. The us soldiers will also assist in the creation of an "international park' in the hotly disputed territory along the borders between Columbia and Venezuela. According to senator Phil Gramn, this plan is not very feasible. "At a time when we are planning to cut down defence expenditures and privatise military depot work in order to save money, when maintenance and equipment are being shortchanged, it is difficult to believe that there is actually discussions about sending warriors to rainforests of Brazil," Gramn wrote.