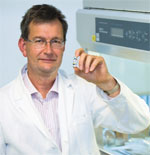 FOR some wheat bread and barley porridge are poison.

Those suffering from celiac disease cannot tolerate the protein, gluten, found in most cereals. Their immune system reacts when gluten is digested, leading to acute stomach ache, diarrhoea, vomiting, malnutrition and often ulcer and cancer. It has been 60 years since scientists nail down the problematic protein, yet there is no remedy for the disease. The only way celiac patients can manage the disease is with gluten-free diet.

Scientists at Walter and Eliza Hall Institute of Medical Research in Australia and University of Oxford in the UK recently discovered the precise way gluten triggers immune reaction. Based on the finding, one of the scientists Bob Anderson has developed an immunotherapy for celiac patients.

The scientists studied 200 patients with celiac disease and asked them to eat barley risotto, wheat bread and rye muffins—all rich in gluten—for three days. Six days later, they examined their blood samples to assess immune response to the 2,700 protein fragments, or peptides, in gluten. The team identified that 90 peptides caused some level of immune reaction, with three of them particularly toxic. "The three peptides account for the majority of the immune reaction to gluten," said Anderson, the lead author of the study.

These toxic peptides stimulate T cells, antibodies used by the immune system to neutralise foreign bodies like virus, against our own tissues. The T cells damage the lining of the small intestine that helps absorb nutrients thus resulting in digestive disorders, the scientists noted in Science Translational Medicine on July 21. The damage is so profound that half of the celiac patients suffer from intestinal illnesses even five years after adapting to a gluten-free diet. "A series of intradermal injections of the toxic peptides can educate the immune system to be tolerant," he said.

Anderson, who is also the director of a biotech company in Australia, Nexpep, has patented the immunotherapy. His company completed the phase 1 clinical trials in June and is awaiting the results. "The findings by the Australian and UK researchers can be used for developing drugs and vaccines against celiac," said Ludvig Sollid, immunologist at University of Oslo in Norway.