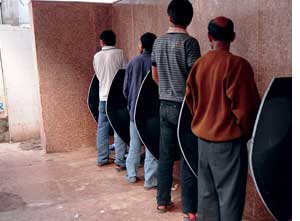 If it were not for the quality of the mutton, Brijesh Kumar, a customer of five years, would not have endured the smell of ammonia that hung around Mohammed Haroon’s shop. The six-square-metre concrete platform from which Haroon plies trade is two metres from a public urinal in Paharganj near the New Delhi Railway Station. Recently, the authorities renovated the urinal. Kumar’s nostrils are now in agreement with his taste buds.

This new-found agreement is a result of Paharganj’s changing profile. The locality is a budget lodging hub. The Municipal Corporation of Delhi (MCD) knows it will be busy come the Commonwealth Games in October.

By June 2010, MCD plans to install 4,000 urinals that are waterless and—as Haroon and Kumar confirm—odourless. These will be installed in 1,000 public toilets across the city.

The corporation expects to save 500 million litres of water each year. “Since one to five litres of water is used per flush we thought the waterless technology would have great potential in high-use areas such as near bus stops, markets and hospitals,” Amiya Chandra, MCD’s deputy commissioner, said.

The plan is to renovate roadside urinals, like the one near Haroon’s establishment, as well as install new ones. The cost: Rs 40 crore. Savings: over Rs 50 lakh a year for Delhi’s water utility.

Toilets use water to remove stains and stink, but water itself is responsible for the odour.

Urine is odourless; it is hydrolysis of the urea present in it that generates stench, said V M Chariar, professor atIIT Delhi, who has developed a technology allowing urinals to work without water. Assisting hydrolysis that releases ammonia are certain bacteria.

To deal with the odour, waterless urinals available in the market use some standard techniques that either check bacterial growth or trap the foul smell in waste pipes (see: Set the trap). MCD has installed waterless urinals in 100 public toilets using these techniques. The one near Haroon’s shop uses a membrane to block odour.

Waterless urinals, though, don’t come cheap. While a standard ceramic urinal pan costs Rs 500 onwards, waterless urinals are available for Rs 6,000 onwards (see: Take your pick). Companies selling waterless urinals say they save money in the long run. “Not only will you save water, but also the electrical cost of running them,” said Manish Tetarway, a marketing man for Hindware, a leading sanitary ware provider in India. These urinals are also less likely to malfunction because they have no flush valve, handles, water supply or electrical sensors, he added. 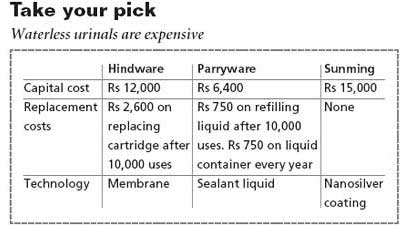 Yet t he technology is tagged expensive because of a high recurrent cost. Biological blocks, cartridges and sealant liquids used to trap odour have to be replaced after a specified period. Chindia Traders, a new entrant to the market, hopes to exploit this drawback in prevalent technologies. It imports from China ceramic urinal pans, Sunming, that are impregnated with nanosilver. The nanosilver glazing does not allow odour-causing bacteria to grow and repels water. “In our pan 80 per cent of the urine that stains and stinks in regular urinals flows down the drain,” said Sabyasachi Dasgupta, assistant manager (marketing) of Chindia Traders. The coating does not fade. “Our one time cost may be high (Rs 15,000) but since we use neither cartridges nor sealants, maintaining our urinals is easy,” he said.

The company has installed 330 waterless urinals in India since it began operations in August 2009.

On a trial basis it installed one for the Central Public Works Department at Nirman Bhawan in Delhi free of cost. “We approve of the technology but it would be too expensive if we were to replace over 100 urinals in the building,” Gajendra Singh, executive engineer, said. It would be cheaper to retrofit instead, he added.

“I have asked sanitary ware providers to localize their products and somehow reduce the cost,” said Prakash Kumar, consultant at UNICEF India who promotes ecological sanitation. But reducing cost is not easy. The company Chindia Traders imports from has a patent on how their pans are made. “I have spoken to several ceramic makers and it is just not viable to produce them in India,” said Dasgupta. “On top of this a 30 per cent duty is levied on import.”

Chariar’s team atIIT Delhi, along with UNICEF and the Stockholm Environment Institute, is developing a low-cost option that can be retro-fitted into urinals. Its odour trap called zerodor is a ball that can be placed over the circular hole at the bottom of the urinal. When urine flows, the ball rises opening the trap. Once urine has drained it falls back into the hole, blocking the odour from drainage lines.

The institute hopes to launch the technology by the end of March 2010. Zerodor will cost about Rs 250. The focus is on the odour trap and not the entire system, said Ramesh Sakthivel, part of Chariar’s team. Companies are in the initial stage of promoting waterless urinals. They too will realise it makes business sense to sell their technology, be it cartridges or valve traps, in unassembled parts, he added.

The cost of waterless urinals and the extra care — like no spitting — they require in maintenance have forced MCD to rethink its options. Initially, it tried an approach where private parties handed over the public urinals to the corporation after building and running them for a few months. Once MCD began maintaining the toilets, the high cost hit home. It has stalled work on 250 toilets and plans to revaluate its options. “Give us a technology that is cheap and workable,” MCD’s deputy commissioner said.

The plumbing system in India is not built to run without water, said Vinod Gupta, an architect in Delhi. Over time the urine crystallizes and chokes the system, so Gupta’s consultants have advised him against using waterless urinals. This can be managed, says Sakthivel. Crystallisation will affect only pipes carrying urine at the household level. As far as sewers are concerned, they have enough flow to carry away urine and deposits, he added.

Some urinals use a cartridge that collects solid particles to prevent blockage, but urine still forms sludge over time. That’s why urinals which use microbes to prevent crystallization have gained popularity. PVR Cinemas has converted over 200 urinals in its cinemas across the National Capital Region into waterless units.

At the centre of each urinal is a Bio Block containing frozen microbes, which are released on coming in contact with the urine. These microbes break urea into compounds other than ammonia. Once a day a biochemical solution is poured in each urinal to assist cleaning.

A kilogramme of Bio Block imported from the UK for Rs 1,000 and five litres of the biochemical solution costing Rs 2,000 are needed for each cinema every month, said Shweta Goel, executive housekeeper for PVR. Given the low water tariffs, the money spent on running waterless urinals in PVR is more than the savings in water bills. “If you take into account the expenditure on deodorants and naphthalene balls, I think we break even,” said Goel.

Efforts like PVR’s are more on the lines of corporate social responsibility. “The government needs to look at such interventions in the context of increasing pressure of waste management in cities,” said Chariar ofIIT Delhi. It should make waterless urinals mandatory for public toilets, he added.

Haroon is pleased the public urinal near his shop has stopped stinking. Although he does not use the facility, it bodes well for business. “To stand and urinate is against the teachings of the holy Quran,” he said. Haroon uses the toilet at a nearby mosque.