Bhartiya Kisan Union leader Mahendra Singh Tikait was arrested in Ghaziabad on August 18. He was on his way to lend support to a farmers' rally in Ghorhi Bachhera village in Greater Noida, Uttar Pradesh. The rally was to condemn the police firing on August 13 that killed five people and injured many. Police had opened fire on farmers gathered outside the Greater Noida Development Authority office to demand higher compensation for the land it had acquired from them in previous years for infrastructure projects.

Though Tikait was released the same day, police forces have been deployed around his village Sisauli, Muzzaffarnagar district, from where he has been instructed not to move out. The kisan leader is concentrating on rallying farmers all over the state.

To meet the shortfall in diesel supply, the government is mulling declaring Reliance Industries' diesel sales in the domestic market as deemed export. Between April and July this year, the demand for diesel grew by 18 per cent; government-owned refineries can meet only 12 per cent growth in demand, says Indian Oil Corporation Chairman Sarthak Behuria. "The demand in transport and agriculture grew by 10 to 12 per cent, while that in the power sector and industries rose by 30 per cent," he adds. To cope with this quantum increase, state-owned oil marketing companies need to import about 3.5 million tonnes of diesel--about 20 per cent more than last year.

Buying from Reliance Industries' Jamnagar refinery will be 30 per cent cheaper. The refinery is an export oriented unit that produces 12 million tonnes of diesel a year. It already sells cooking gas in the domestic market after the product was deemed export last year.

Sugar prices may shoot up further during the forthcoming festive season, unless the government releases at least 5 million tonnes of sugar into the open market for the October-December quarter. The Centre has already issued show-cause notices to 252 mills in 15 states for not complying with its order that 3 million tonnes of buffer stock sugar be released into the market. Sugar prices rose by almost 25 per cent in June and July. Experts blame it on the fall in production and domestic supply.

In a bid to ease food shortage, Venezuela has removed price controls on seven food products and raised caps on others. Basic food items such as oatmeal, fresh and canned tuna, pork cuts and salt have been excluded from price controls, while the maximum price for mayonnaise, margarine, tomato sauce, bread, beef, pasta and vegetable oil has been raised by 50 per cent. The government imposed price control on food products in 2003 to combat inflation.

The move has triggered fears of an upward push to an already high inflation that climbed to 33.7 per cent in July. Analysts see it as a political gimmick prior to November's municipal elections.

Even as China's emergency measures to guarantee clean air for the Olympics paid off, its attempt to curb emissions continues. In a latest move, it has raised sales tax on big cars, while reducing taxes on small cars, with engine capacities of one litre or less, to as low as 1 per cent. Starting September 1, the tax on cars with engine capacities bigger than four litres will be doubled to 40 per cent and those with engine capacities three-four litres will pay a 25 per cent tax, up from the current 15 per cent, the finance ministry said on August 13. China is the world's second biggest market for passenger cars, with some analysts forecasting the sales to reach 10 million by the end of 2008.

The un fao has announced the discovery of a new strain of avian influenza (h5n1, clade 2, ema3) in Nigeria. The virus was recently detected during outbreaks in the states of Katsina and Kano. fao has confirmed that it is genetically different from the strains that circulated in the country during earlier outbreaks in 2006 and 2007. It is similar to those identified in Italy, Afghanistan and Iran last year. Experts are concerned because it remains unknown how the strain has been introduced to the continent. "It seems unlikely that wild birds have carried the strain to Africa, since they last migrated from Europe and Central Asia to Africa in September 2007 and this year's southerly migration has not started yet," says Scott Newman, International Wildlife Coordinator of fao's Animal Health Service. Newman links it to illegal international trade and unreported movement of poultry. 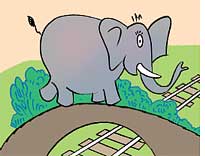 The Authorities of Rajaji National Park in Uttarakhand are working on a project to build two overpass corridors for elephants. Constructed at the direction of the Supreme Court-appointed Central Empowered Committee (cec), the flyways will bypass a stretch of railway tracks and a motorable road that pass through the Motichur elephant corridor. Each overpass will be of 100 m wide and up to 10 m high. Authorities plan to plant grass and shrubs to give it a natural look. They have also approached the Indian Institute of Technology, Delhi, to make it vibration proof. The Compensatory Afforestation Manag-ement and Planning Authority will fund the project. Once completed, it will be the first overpass of its kind in India. 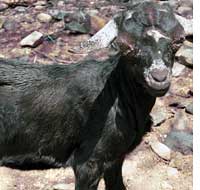 The outbreak of a contagious and virulent disease, Peste de Petits Ruminants (ppr), in Kenya and Uganda is exacerbating the already high levels of food insecurity in the region. Locally known as 'lomoo', the disease causes fever and diarrhoea among livestock and is often fatal. Endemic in Ethiopia and some parts of Sudan, ppr was first reported in Kenya in 2006. Since then, it has spread to 16 districts and killed over 400,000 sheep and goats.

The government vaccinated 1.5 million goats and sheep in 2007, but it says the campaign could not be completed due to lack of funds. Veterinarians say about three million sheep and goats

across the country are at risk. They blame failed rains this year and say the disease is fast spreading as ppr- affected livestock from the drier northern and central areas are moving to the southern areas in search of water and pasture. Experts say there is a need for continuous vaccination for at least three years to control the disease.

The European Commission has imposed tight restrictions on the export of Portuguese pine after experts said that the country's pine forests are at risk from a bug that causes pine wilt. The disease has killed tens of thousands of pine trees in Portugal and is spreading further. The commission mandates that the pine must be disinfected and given a clean bill of health before it leaves the country. Officials say the nematode (Bursaphelenchus xylophilus) has already wreaked havoc in east Asia. Carried by a flying beetle, the parasite eats its way through the pine tree's circulatory system, choking the flow of sap and killing it within two weeks. It was first detected in the Setbal region in 1999, when it wiped out 340,000 trees within a span of two years.

Climate change is making birds in the uk breed early. Analysis of 30,000 nests shows that birds such as the chaffinch and the robin are laying their eggs about a week earlier than in the 1960s. The survey also found that birds were altering their nesting and migration patterns, and travelling further to find food. The change in egg-laying behaviour has prompted concerns that young birds could emerge in spring before suitable food is available. It appears that eventually the birds will breed so early that most of them will be out of sync with their major food source of caterpillars, say ornithologists. The report, jointly produced by conservation groups, also states that drier summers are forcing species such as the song thrush to rear fewer chicks because food is less than ample.