Centre legalises street vending and gives the profession its due respect. But accommodating vendors is a challenge 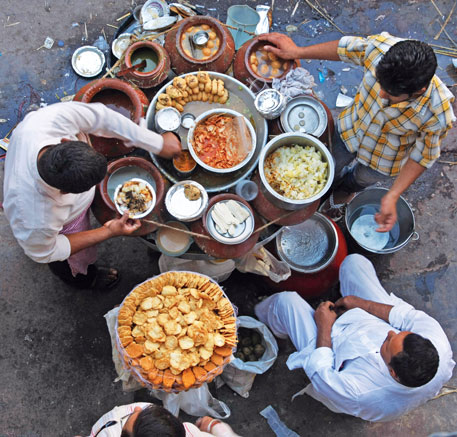 It was late 1970s. Each time Mahavir’s uncle from Delhi visited his house in Ferozabad district of Uttar Pradesh, the teenager would listen with rapt attention stories of glitzy city life. It did not take Mahavir too long to pack his bags, leave his parents’ home and reach the capital city in search of a job. “I managed to start working with a street-food vendor. Within two years I had saved enough to buy my own rehri, or handcart. It’s been 30 years since. Every day, I place my rehri on the footpath at Kasturba Gandhi Marg and sell chaat,” he says. “The Rs 10,000 that I earn every month is enough to feed my wife and three children. With the earning I managed to give my children education. They have now grown up and are capable of earning a livelihood.”

Mahavir’s chaat is a favourite among foodies. “But my customers also accuse me of crowding up the footpath. They say rehriwalas encroach their walking space and create traffic chaos,” he says.

“Street vendors are, no doubt, a big nuisance. They park their handcarts wherever they want to and create traffic jams,” says Suresh Rajput, traffic constable with Delhi Traffic Police. “First one vendor places his handcart on the road. Gradually, within a week a small market appears around it.”

David Jacob, an ICICI employee at Chittaranjan Park, Delhi, complains that street vendors park their handcarts right in front of the bank. “Our customers complain that they never get space to park their vehicles. We asked the police to intervene several times, but to no avail.” Things did not improve even after complaining to the municipal authorities. 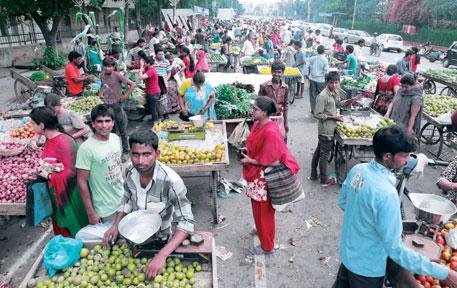 Mahavir says no one is really interested in setting this right. “Officials come every week and collect Rs 10-Rs 100 for allowing us to operate from the footpath.” A study by National Association for Street Vendors of India (NASVI), a group of 715 organisations representing 450,000 street vendors in the country, states that 95 per cent of the 600,000 street vendors in Delhi do not have licence. In fact, there are only a handful who know that licence is essential to place a handcart, says Mahavir.

Obtaining a licence is no mean feat. The tehbazari in every municipal corporation issues the licence. For this, it charges Rs 100-Rs 1,000, depending upon the municipal authority. It also asks for a number of documents, which most people do not possess, or are illiterate to produce. Back on the street, they face constant harassment through extortion and eviction.

Street vendors pay a whopping Rs 600 crore as bribe every year in Delhi alone, states a study by Delhi non-profit Manushi. According to the Ministry of Housing and Urban Poverty Alleviation street vending supports 10 million families in India.

“This informal sector provides a perfect distribution network for a country like India where everybody cannot afford to go to malls and retail shops. In fact, if one visits a vegetable or a fruit market, even the elite can be spotted making purchases there,” says Sharit K Bhowmik, national fellow, Indian Council of Social Science Research, and professor at the Centre for Labour Studies at Tata Institute of Social Sciences, Mumbai. He has worked on street-food vendors for over three decades.

“The rehri is our livelihood. But who is bothered?” says Mahavir. A recently-enacted Central law gives him hope. President Pranab Mukherjee gave his nod to the Street Vendors (Protection of Livelihood and Regulation of Street Vending) Bill in March 2014. The Act that came into force on May 1 legalises street vending, giving street-food vendors the much-needed respect for their profession and social security. The law also means that Mahavir will no longer have to pay bribe.

The Act asks for setting up town vending authorities (TVAs) in each municipal body. These will have town vending committees (TVCs) which will comprise municipal commissioner as the chairperson, street vendors, non-profits, policepersons and town planning department officials. TVC will survey the area, identify the existing street vendors and collect their personal details like fingerprints, address and phone number. Licence will then be issued to them.

Following this, TVC will create zones where all street vendors of a locality will be placed. One vending zone will comprise 2.5 per cent of the area’s population. In case the number of vendors is high in an area, vendors for that area would be chosen through draw of lots. The rest will be accommodated in adjoining areas. Areas where vendors have been working for over 50 years will be designated as natural markets. The vending zones will have basic amenities like water, power and toilets. Survey will be conducted at least once every five years. No street vendor shall be evicted or relocated till the survey is complete and licence is issued to all.

“Street vending is not a new concept in India. When cities were being planned, we kept spaces for schools, institutions, hospitals, but forgot street vendors,” says Arbind Singh, president of NASVI. The Ministry of Urban Development acknowledges the importance of street vendors and states that they are “often those who are unable to get regular jobs in the formal sector. They try to solve their livelihood issues through their own meager financial resources and sweat equity.”

“We should be happy that instead of resorting to illegal activities they are working hard to earn a living,” says Singh.

Street vendors are not only entrepreneurs but also a link between the formal sector and consumer. They buy products from wholesalers and sell them to people. This informal sector has flourished without any space and basic amenities.

Efforts to regulate street vendors were started by former prime minister Atal Bihari Vajpayee. In 2004, he introduced the National Policy on Street Vendors. The policy categorised street vending into three zones-restriction-free, restricted and no vending. It provided for weekend markets on public ground, parade ground and in areas meant for religious festivals. It also had provision to set up markets in areas outside shops, and in parking lots in business areas. These markets could be run from 7.30 to 10.30 as night bazaars. The Act enforced this year gives legal backing to the policy.

In Gurgaon, Haryana, the municipal corporation spent Rs 430,000 on conducting ward-wise survey of 14,000 street vendors in the last two years. It collected street vendors’ personal details to issue smart cards. The survey is videographed to avoid discrepancies and duplication.

In Madhya Pradesh, the government has divided the city area into three zones-green, yellow and red. In green zones, vendors can park their handcarts at one place and continue business all day. In the yellow zone, vendors can do business for a stipulated time period. Vegetable and fruit vendors are allowed here in the morning and evening hours. Red zone is barred for street vendors, says S K Shukla, urban development commissioner-cum-secretary, Madhya Pradesh. “There are lots of challenges in designing the zones because there are no new or vacant spaces in the city. However, it is not an impossible task. We are doing it in Bhopal and Indore,” he says. (See ‘Madhya Pradesh empowers its vendors’.)

Officials in Delhi say implementation is not easy. “The Madhya Pradesh government gives monetary assistance to its municipal corporation so that it can provide amenities to street vendors,” says a municipal commissioner of Delhi. “Delhi does not have any such provision. The manpower and money required to conduct surveys and issue licences were not taken into account while drafting the law. Municipal funds are already scarce. With this additional financial burden, we really do not know how to work,” he says.

This apart, in a big city like Delhi, tackling problems like duplication of licence is difficult. Relocating vendors who cannot be accommodated in vending zones is a big challenge in the capital city. Delhi, the second largest populated city, has a big drawback that it cannot expand. “Lawmakers ignored such problems while drafting the law,” he says.

The law has also made too many stakeholders in the TVC. So most of the times meetings end up in chaos, he adds.

Praveen Kumar Bansal, former senior deputy mayor of Ludhiana Municipal Corporation, says, “Many a time, settling street vendors becomes a political issue. They form a good votebank and municipal bodies prefer to allow the vendors to operate from their chosen area.” Officials alert the street vendors during anti-encroachment drives so that they can close shop in time, he says.

“Finding new vending areas can be difficult in Punjab because most of the government land is already mortgaged and property rate is very high here,” he says.

In old city areas most of the markets are more than 50 years old and can be categorised as natural markets. “Regulating these can be a challenge,” says Bansal.

Arbind Singh says the municipal corporations are unsure of the new law because they think it infringes upon their rights and duties. For, all the decisions will now be taken by TVCs. “The corporations should realise that they can make revenue by issuing licences.”

The law has created another controversy. It states that street vendors above 14 years will be allowed to operate. “The street vendors’ Act comes in conflict with the Juvenile Justice (Care and Protection of Children) Act, 2000, and the Bombay Prevention of Begging Act, 1959,” says Rohan J Alva, assistant professor at Jindal Global Law School in Sonepat, Haryana.

“India is plagued by the problem of child labour. By setting 14 years as the minimum age for obtaining a licence, the government is perpetuating child labour,” he says. The Act also contradicts the National Policy for Children, 2013, which recognises a child to be a person below the age of 18.

Babulal Gaur, then urban development minister in Madhya Pradesh, had raised the concern when the Act was still a Bill. He had requested the Centre to increase the minimum age to 18.

Planning is the way forward

The Centre for Environmental Planning and Technology (CEPT) University, Ahmedabad, studied the city’s streets along with Gujarat-based non-profit Self-Employed Women’s Association of India (SEWA). Their report states that detailed market mapping is the way forward. Often, official planning processes do not give the actual picture, so there is no documented information on the scale and size of vending activities. Market mapping is best undertaken by vendors’ associations which understand the daily and weekly fluctuation of trade. Market mapping should consider the number of vendors at different times; types of goods sold; location of utilities such as toilets and taps. Any redesign or rearrangement of space should accommodate all existing vendors.

In 2011, Deborah Lambert, public space designer with the firm Felixx in the Netherlands, studied the road design in Kanpur and suggested how roads could accommodate street vendors. According to her, in a road that does not have any obstruction, stopping zone measuring 1.5 metres can be created for vehicles. Adjacent to this a pavement of width 2 metres to 2.5 metres can be constructed to allow two persons to pass by. A two-metre width platform near the pavement can accommodate vendors.

“The idea behind enacting a new law is to create space for everyone,” says Anuradha Singh of NASVI. She has helped the Madhya Pradesh and Goa governments draft their legislation to implement the law. “Road is for vehicles, footpath for pedestrians and shops for shopkeepers. Let their be space for street vendors, too,” she says.