Electronic companies worldwide, who are trying to develop a new generation of televisions, are finding the going tough 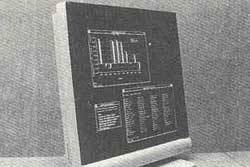 THE FRUITS of technology are usually publicised much before they become achievable and this seems to be true of the high definition television (HDTV) -- the much-advertised new generation of television -- as well.

HDTV promises sharper images and bigger screens as compared to conventional televisions and manufacturers claim it will bring the delights of the cinema screen to people's homes. But the ground reality is different: Manufacturers are still struggling to develop cost-effective, reliable, high-resolution, flat screens that are necessary to replace the cathode ray tubes (CRT) used in conventional televisions.

CRTs, though quite good for most purposes, are unwieldy as they occupy lot of space -- the electron "guns" that paint the picture by scanning across the face of the tube have to apply their strokes from a distance. Efforts to shorten this space have failed so far -- the resulting displays were too small and the images indistinct.
In the billion-dollar race for designing flat screens, Japan is in the lead. In April this year, the Japanese electronics giant NEC announced its first flat screen that displays full-colour pictures with greater clarity than conventional televisions.

Liquid crystal display (LCD), commonly used on small calculators and digital watches, was the first substitute technology that attracted electronic firms working at developing HDTV. The alignment of liquid crystals -- chemicals that behave optically as a crystal when liquid -- can be controlled with an electric field. So, under certain conditions, the crystals can be lined up to let a dot of light through in response to the electric signal.

Early LCDs had poor contrast and a narrow viewing angle, which made them unsuitable for anything larger than a watch-face. But by 1989, LCD design improved substantially and display that looked almost as clear as a CRT was developed though only in a single colour (monochrome).

As electronics engineers attempted to make full colour screens, they ran into a host of difficulties. For example, the image became less sharp and the viewing angle decreased, which made showing moving pictures or following a computer cursor impractical.

Now technologists have been able to increase the speed and isolate the liquid crystal from interference, greatly improving the quality and contrast of the image. But no one has yet found a way of mass producing LCDs larger than 40 cm diagonally, and even at this size the costs are tremendous. Today, NEC can produce displays which are 33 cm diagonally, and their scientists predict that though 50 cm displays should be possible within five years, it will "not (be) easy".
Recently, Tektronix, which is based in Oregon, provided details of a 41 cm full-colour, LCD screen using ionised gas called plasma instead of transistors to control electric signals. Though the resolution is not as high as with transistors, some companies believe plasma-switched displays may eventually prove suitable for HDTV.

The wide choice of flat screen technologies suggests there are many laps to go before the race to replace CRTs ends. In any case, each different kind of flat screen will be a winner, for the market will have room for all of them.