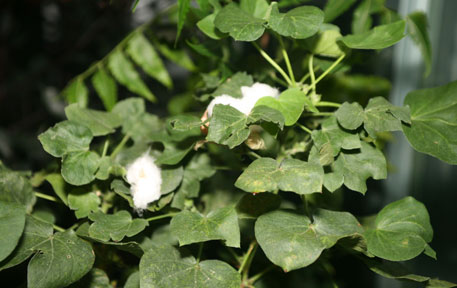 A study conducted by the Council for Social Development (CSD) on Bt cotton, titled Socio-Economic Impact Assessment of Bt cotton in India, has concluded that the genetically modified cotton has improved farmers' lives with its better yields and higher returns. The nation-wide study by the informal study group of social scientists and social workers was funded by farmers’ outfit Bharat Krishak Samaj (BKS) and was released in Delhi on Thursday.

The study states that enhanced yield of cotton by 4.95 per cent has led to a substantial increase in average net returns of farmers by 375 per cent. These higher returns, in turn, have enabled farmers to spend more on health, education, nutritious food and social needs, which has improved their standard of living, the report says. A report by Down to Earth had, however, found that cotton productivity in the country has become stagnant for the past few years after the initial gains that were reported. The Bt technology, first developed by Monsanto company in 1986, came to India in 2002 when the American seed giant entered into an agreement with its Indian partner, Maharashtra Hybrid Seed Company or Mahyco.

The study by CSD was undertaken to validate farmers’ experience using Bt cotton in the nine cotton growing states of India—Maharashtra, Punjab, Haryana, Rajasthan, Madhya Pradesh, Andhra Pradesh, Karnataka, Tamil Nadu and Gujarat.  During the course of study, more than 1,050 farmers and 300 agricultural labourers were surveyed across the country with inputs from secondary data sources like ministry of agriculture, economic survey and the United States' department of agriculture.

During the report release, CSD director T Haque said: “It is very evident from the study that hybrid Bt cotton technology is scale-neutral and farmers' responses have underlined significant improvement in livelihoods, better yields and higher returns. The country has also benefited immensely as India has become a net exporter from being a net importer in recent years.”

BKS president Ajay Jakhar said that the study was commissioned to assess farmers’ experiences and separate truth from perception. The field research confirms that poor institutional credit, fluctuating prices for cotton are the main reasons for farmer suicides. “If you see the input cost, it’s the labour cost which is more expensive and not the seed,” added Jakhar. BKS claims that the study was completely funded by the farmers and no funding is accepted by the organisation either from private entities or the government.