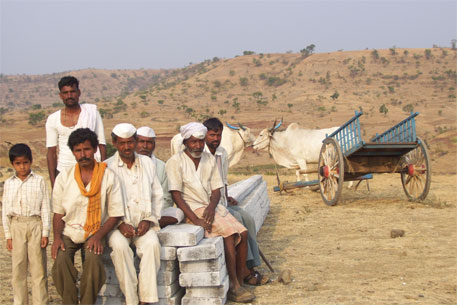 Chronic drought is becoming a way of life in the Marathwada region of Maharashtra. Successive budgets, Central and State alike, have failed to address this region’s chronic water insecurity. Union Budget 2015-16 is no exception.

While the budget says a lot about water efficiency, it fails to identify areas of responsibility, says D M More, former director general of the Maharashtra Water Resources Department. “I don't see any real seriousness in the budget on tackling drought. Prime Minister Modi has been speaking a lot about more crop per drop, but the entire onus of water efficiency has been put on the agriculture sector, whereas a major proportion of dam water in the country is going to coal-fired power plants. Five Ultra Mega Power Plants have been sanctioned, but there is no mention of modernisation of these thermal power plants to bring down their water consumption,” he says.

More explains that investment in improved technologies can bring down water consumption to as much as 10 per cent of the present consumption and a huge amount of water can be released for the agriculture sector. This also applies to other water-guzzling industries like sugarcane crushing which consumes huge amounts of water in Marathwada. The region is home to the bulk of Maharashtra’s sugar industry. “Unless these industries improve their water efficiency, even available water resources will continue to be diverted from essential needs like drinking and irrigation,” he adds.

Parineeta Dandekar, water expert from South Asia Network of Dams, Rivers and People, agrees. “The drought situation is particularly critical this year in Marathwada,” she says. “All eight districts have received between 40 and 50 per cent rainfall and yet, at least 70 sugar factories in the region have used up an estimated 23.1 million cubic metres of water to crush 154.28 lakh tonnes of sugarcane.”

Dandekar says this water could have been used to irrigate 3,238 hectares of high-yield groundnut and an even higher land area under jowar. Alternatively, it could have provided drinking water to almost 1.6 million people till the onset of the next monsoon. “The worst part is that the end of the crushing season coincides with the beginning of the dry season. Can we afford such huge water loss in peak drought conditions?” she asks.

Pradeep Purandare, former professor at Aurangabad-based Water and Land Management Institute (WALMI) and expert member of Maharashtra government’s Marathwada Development Board, says that the budget requires more clarity in the area of watershed management, water efficiency and drinking water supply. “The budget allocates Rs 5,300 crore to micro irrigation. It is a good move, but is hardly sufficient,” he tells Down To Earth. The budget also proposes ideas like infrastructure bonds and Public-Private Partnership (PPP) in irrigation. “These proposals need to be examined further for implications. The PPP idea does not look like a good one as it will further increase private control over water. PPP models in water supply have been met with stiff resistance all over the country, and in many places like Aurangabad, it has not taken off at all. PPP in irrigation is likely to be an even bigger disaster which might augment the drought situation rather than mitigate it. Infrastructure bonds in irrigation also need to be examined carefully for implications,” Purandare says.

S B Warade, former joint director of WALMI, also demands more clarity on allocations in the area of watershed development and water efficiency. “Throughout the country today, the efficiency of dam water supply is not higher than 30 per cent. In Maharashtra, it is around 25 per cent. But successive budgets have gone on allocating funds for the construction of more and more dams. Command Area Development Authorities (CADA), which look after the process of developing canal networks and distributing dam water, are chronically starved of funds. Even this time, there has been talk about water efficiency, but the only concrete provision appears to be the Rs 5,300 crore for micro-irrigation,” he says.

He also finds the provisions for watershed development vague. “Allocation is urgently needed for Integrated Watershed Development Programme (IWDP) to fulfill government’s promise of water self-sufficiency for the farming sector. Today, the allocation for IWDP in the country is between Rs 6,000 and Rs 12,000 per hectare, but complete soil and water conservation measures cost a minimum of Rs 25,000 per hectare. Additional funds are required for maintaining existing structures. There are no funds for this purpose at all at present. We have made a submission to the Kelkar Committee to this effect, but have received no response. The result is that only check dams are being constructed under IWDP, which is not only a partial solution, but also a transitory one because dams fill up.”