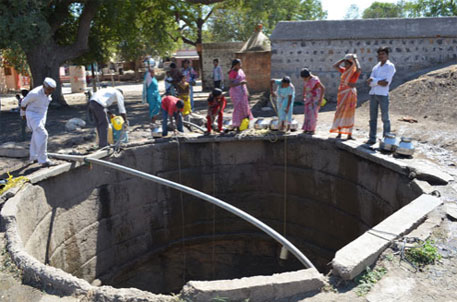 The budget presented by Finance Minister Arun Jaitley on Saturday is a disappointing one if one considers investments required for climate adaptation and mitigation. Civil society organisations and think tanks had hoped the budget would address some concerns that had been raised in relation to climate change in the past year, such as equal emphasis on adaptation and mitigation, adequate insurance cover for crop damage and better disaster preparedness to cope with extreme weather events, to name a few. But the finance minister’s speech did not mention climate change even once.

Addressing the Lok Sabha, Jaitley spoke of the government’s commitment to farmers. Referring to the Soil Health Card Scheme, which was unveiled by Prime Minister Narendra Modi on February 19, he said, “I propose to support the Agriculture Ministry’s organic farming scheme, Paramparagat Krishi Vikas Yojana. The Pradhan Mantri Gram Sinchai Yojana is aimed at irrigating the field of every farmer and improving water use efficiency to provide ‘Per Drop More Crop’”. The Finance Ministry has allocated Rs 5,300 crore to support micro-irrigation, watershed development and the Pradhan Mantri Krishi Sinchai Yojana.

The emphasis was primarily on increasing the irrigated area, improving the efficiency of existing irrigation systems, promoting agro-based industry for value addition and increasing farm incomes, and reasonable prices for farm produce. This is a positive sign in terms of adaptation measures to fight climate change. Irrigation and watershed management will make space for drought-proofing; however, this will address just one aspect of the problem. Flooding and water logging are faced by a large number of people in the Indo-Gangetic belt and the coastal region of the country. How they can mitigate these merits discussion.

Focusing on insurance through the lens of Jan Suraksha (people’s security), Jaitley raised a concern, saying that “large proportion of India’s population is without insurance of any kind—health, accidental or life”. At first glance, it seems like a proactive step on the part of the government for people’s welfare.  But what about insurance in case of catastrophic events? Insurance of crop and livestock is a crucial component of financial adaptation measure, but it found no mention in the Union budget.

India witnessed quite a few catastrophic weather events in the past year, with Cyclone Hudhud itself causing an estimated loss and damage of about Rs 70,000 crore in Visakhapatnam and Srikakulam districts in Andhra Pradesh. If the government aims to focus on agricultural productivity and looks at agriculture as a priority concern, it has to foresee the losses and damage that an extreme weather event can cause on crop yields. The National Adaptation Fund on Climate Change, which was allocated Rs 100 crore last year, found no mention in Jaitley’s budget speech.

However, the support for Mahatma Gandhi National Rural Employment Guarantee Scheme, through the initial allocation of Rs 34,699 crore for the programme, will hopefully see some channelisation of funds for addressing climate change impacts and adaptation measures at a local level. Also, the finance minister did do much for the National Clean Energy Fund. He announced that clean energy cess would be increased from Rs 100 to Rs 200 per tonne of coal and the amount would be diverted to the Clean Energy Fund. He further mentioned that the Ministry of New and Renewable Energy has “revised its target of renewable energy capacity to 175,000 mega watt (MW) till 2022, comprising 100,000 MW solar, 60,000 MW wind, 10,000 MW biomass and 5,000 MW small hydropower projects”.

Since the past year, India has maintained that it has been spending more than 2.6 per cent of its gross domestic product to deal with the challenges of climate change. The specific areas which got more focus, especially with respect to climate change adaptation, were agriculture, water resources, health and sanitation, forest, coastal zone infrastructure and extreme weather events. But other major concerns, echoed in the People’s Budget Initiative report in January this year, were hardly addressed in the budget.

On February 24, days before the Union budget, questions on the effects of climate change and measures taken by the government were discussed in the Lok Sabha. Prakash Javedekar, the Union Minster of Environment, Forests and Climate Change, had stated, “(The UPA) government had released National Action Plan on Climate Change on June 30, 2008, that outlines eight missions and other initiatives, including disaster management response to extreme climate events, by enhancing measures for prevention, mitigation and preparedness to respond to the extreme climate events and setting up early warning system.” The eight national missions are at various stages of implementation by the nodal ministries and departments, but progress has been slow. The initial budget allocation for most of the missions was considered to be inadequate when it came to implementation.

Earlier, a report was released by the Climate Change Finance Unit, Ministry of Finance, under the United Progressive Alliance government where they had committed to spend “large resources through its planning process on meeting the domestic mitigation goal to reducing the emission intensity of its GDP by 20-25 per cent by 2020 in comparison to 2005 level”. This hardly found mention in Jaitley’s budget speech.