With measures to boost solar power generation and water conservation, budget has been termed “futuristic and technology-driven” 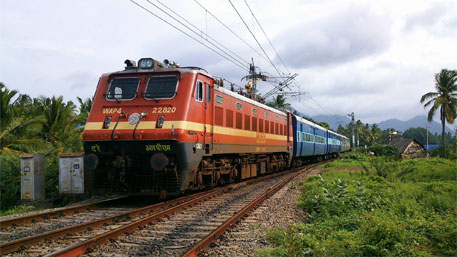 Union Minister for Railways Suresh Prabhu, in his first Railway budget, has called for a slew of environment-friendly measures to upgrade the services offered by the Indian Railways. Along with modernisation and safety measures, the minister has envisaged an investment of Rs 8.5 lakh crore in next five years to finance the measures through multinational banks and pension funds of the Government.

The budget has been termed as “futuristic and technology-driven” even as the minister did not announce any increase in the fares or any new trains and routes. The budget speech was more or less about modernising and improving the services of the Railways. A great part of the budget, however, centred around customer satisfaction, along with introducing innovative ways to earn revenue for one of world’s largest railway network. The minister also assured that recommendations made by a committee, headed by former Director of Bhabha Atomic Research Centre (BARC), Anil Kakodkar, will be taken into consideration while modernising and expanding Railways. In the coming days, one will also see an expansion in the existing railway routes to decongest busy routes.

The budget also calls for an increase in daily passenger-carrying capacity from 21 million to 30 million and an increase in track length by 20 per cent (from 1,14,000 kilometre to 1,38,000 kilometre). To operationalise the same, the minister has called for 52 per cent increase in the total plan budget from Rs 65,798 crore to Rs 1,00,011 crore. The operating ratio, which was around 93 in 2014 has been brought down to 85 (Operating ratio indicates the financial health, which is basically the total expenditure against total earnings by Indian Railways). According to G Raghuram, a professor of transport economics at the Indian Institute of Management (IIM) Ahmedabad, operating ratio of 80 is ideal for Indian Railways. The spike in the operating ratio, as attributed by many railway officials, has been due to the sixth pay commission, leading to an increase in the expenditure in previous years.

Comparing roads and air traffic to railways, Prabhu said that railways are more environment-friendly as they carry more goods per kilometre by using the same amount of fuel. The minister also plans to expand the bio-tiolets, vacuum flush to improve the hygiene of the Railways and to ensure that it is defecation free. He further told the Parliament that a “Swatch Bharat Abhiyan” (Clean Indian campaign) within Railways is already being implemented throughout the country. On the other hand, the minister has assured that roof top solar energy generation is planned along with four waste-to-energy plants in four different corners of the country, to cater to large amounts of waste being generated from the stations.

The opposition has, however, criticised the budget for being “repetitive” and lacking any practicality. Former railway minister Pawan Kumar Bansal dismissed the budget for being repetitive and called for a decrease in the passengers. “In the previous budget, we had introduced a fuel adjustment component, which means that if the cost of fuel like diesel and electricity rises, then there would be a proportionate increase in the ticket fare and similarly the price would come down when the price of fuel decreases,” he said. The minister also informed that nine months ago, the National Democratic Alliance government had increased the fare by 14 per cent because the diesel cost was going up. Since then, the diesel price has almost halved, but there is no lowering of fares. “So, when they said that we will not raise the fare, they were misleading people, the fare should have been lowered instead. Accordingly the fuel adjustment component of the fare should have been lowered, but they are taking credit for not raising it,” said Bansal while addressing the media outside the Parliament.

Supriya Sule, a Member of Parliament and from Nationalist Congress Party compared the budget to an abstract art painting. “It is full of ideas but where is the money to implement this budget?” asked Sule after stepping out of Thursday’s Parliament session. Last year, the Railways had registered a loss of Rs 30,000 crores.

Shiv Sena MPs expressed disappointment for not addressing any local concerns. “There is nothing for my constituency which faces a shortage of trains,” says MP, Chandrakant Khaire from Aurangabad to a local TV channel.