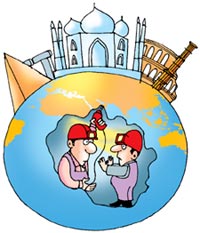 The world's natural and cultural heritage may be on firmer foundation now. Fifteen of the biggest metal miners and producers have signed an agreement vowing to abstain from exploring or mining at sites that carry the United Nations World Heritage site label. The sites include the Taj Mahal in India and the Great Barrier Reef off Australia.

The accord resulted from the industry's discussions with the World Conservation Union (iucn). The International Council on Mining and Metals (icmm) issued congratulatory statements about its members' recognition of the importance of protected area systems in conservation. While appreciating the move, conservationists, however, demand a freeze on all resource extraction. "Our call is: no more mining," announced Isaac Rojas, from Friends of the Earth International.

In a related development, oil major Royal Dutch/Shell announced that it would avoid explorations at natural World Heritage sites. Of the 754 World Heritage sites, only 149 are 'natural'. Sites like the Arctic National Wildlife Refuge coastline off Alaska, which the us government and oil giants have been eyeing for oil exploration, do not feature on the list.

Conservationists anticipate problems arising from the move. "Will this not make it more difficult to designate areas as World Heritage sites? Because if there are potential minerals underground, companies would lobby pretty hard," pointed out Jean-Paul Jeanrenaud from the World Wide Fund for Nature.