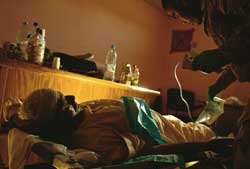 On October 11, Lancet released a study concluding that 655,000 Iraqis died from war-related injury and disease between March 2003 and July 2006. This shockingly high figure has drawn attacks from the Bush administration. It had reacted similarly to a 2004 Lancet study, which concluded that 100,000 Iraqis died immediately after the attack by the us- led forces. Researchers from Johns Hopkins University and Colombia University of Nursing, usa, and Al Mustansirya University in Baghdad, Iraq conducted both the studie

The researchers conducted a cross-sectional cluster sample survey involving 1,849 Iraqi households in 47 different neighbourhoods spread across 18 regions in Iraq. The survey documented a four-fold increase in the crude mortality rate from the pre-invasion to the post-invasion periods. "The Iraqi interviewers spoke fluent English as well as Arabic, and they chased down death certificates in over four out of five cases to make sure that they had a double check on the numbers and causes of death," said Lancet's editor Richard Horton. But George Bush retorted, "I don't call it a credible report."

The us media took their cue from Bush. There have been no editorials in the New York Times, the Washington Post, or other major newspapers, nor any demand for a serious response from the Bush administration.

But the Lancet study has met with some approval in the us. Curren W Warf, of the us National Board of Physicians of National Responsibility, said, "The investigators followed the same methodology that has had been used in estimating death and disease in other conflicts such as Darfur and the Congo, which the Bush administration has uncritically accepted . If the administration believes the L ancet study to be flawed, it should fund its own study of Iraqi mortality. After all this study was funded in large part by a us $50,000 grant from mit; surely the federal government could afford such a study."