Ebola death toll rises to over 630 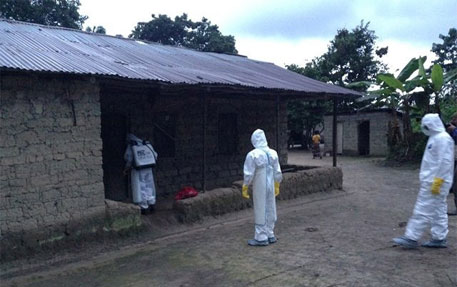 The Food and Agriculture Organization (FAO) of the United Nations has emphasized the need to educate rural communities in West Africa regarding the handling and consumption of meat from local wildlife which might be carrying the Ebola virus, particularly fruit bats.

As of July 17, there have been 1,048 reported Ebola cases and 632 deaths, since the first cases were reported in December 2013 in Guinea, Liberia and Sierra Leone. According to Juan Lubroth, chief veterinary officer with FAO, an Ebola outbreak of this magnitude has not been seen till date.

Ebola is a viral disease that was first reported in humans in 1972 in Sudan and Democratic Republic of Congo. It has a death rate of up to 90 per cent. There is no specific treatment or vaccine available for Ebola other than intensive palliative care.

Ebola spreads through contact and exposure to blood, organs and bodily secretions of infected humans or animals. In rural parts of West Africa, communities often rely on hunting bushmeat to supplement their diet. Although the virus can be killed by cooking the meat at high temperatures, the virus can be spread by the mere handling of an infected animal during butchering or skinning.

Although the origin of the virus is currently unknown, fruit bats, which are eaten dried or cooked to make soups by some communities are the most probable source of the virus, according to FAO.

“We are not suggesting that people stop hunting altogether, which isn’t realistic,” said Lubroth. “But communities need clear advice on the need not to touch dead animals or to sell or eat the meat of any animal that they find already dead. They should also avoid hunting animals that are sick or behaving strangely, as this is another red flag.”

Despite this, efforts to outlaw the hunting and sale of bushmeat by the local governments to control the spread of the disease have met with hostility from the locals.

Traditional burial practices, which involve touching and washing the body, have also contributed to the spread. Families of the deceased and health workers in clinics have been advised to exercise every precaution while handling bodies.

A major barrier that organisations such as MSF are facing is mistrust amongst the local population. Rumours and misconceptions are rife, and medical aid providers have been met with hostility in several places. FAO is currently working in partnership with the local authorities to educate people about the disease and reverse this trend of misinformation by using resources such as rural radio and agricultural extension services.

Hotlines have been set up, such as the one by the Ministry of Health of Guinea, to address people’s concerns and queries.

Tribal leaders and traditional healers have also been engaged to reach out to the local people. Locals may prefer to visit their traditional healer instead of a health centre, which puts both the healer and the patient at risk.

Wildlife surveillance systems have been set up to monitor early outbreaks of the disease, by looking out for unusual deaths in the local animal populations, a venture in which the participation of the local communities is also crucial.

A small town in north Guinea, meanwhile, has reported an unprecedented  recovery rate amongst its  affected. According MSF (Médecins sans Frontières), 16 out of the 21 patients at their facility in  Telimele recovered completely. The organisation has since closed its treatment centre in the town since no cases were reported in 21 days, which is the maximum incubation period for the Ebola virus.

Speculations are being made regarding what has caused this surprising trend, including genetic immunity, prevalence of burial practices that involve less contact with the body, and false test results, implying the recovered patients never had Ebola in the first place.