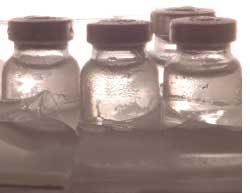 A clinical trial okays an expensive vaccine for India

typhoid is the fifth common disease in India; children are particularly vulnerable. But no vaccine to prevent this contagious disease has been part of the country's public health programme. Researchers recently carried out clinical trial of an injectable vaccine in Kolkata slums and said the immune system of Indians responds well to this vaccine.

Caused by bacterium Salmonella typhi (S. typhi), typhoid is transmitted by the ingestion of contaminated food or water. Health experts suggest maintaining sanitation and hygiene to prevent typhoid outbreaks. But not all communities, urban slums for example, have access to such amenities. Though antibiotics are available, multi-drug resistant typhoid strains have begun to emerge since the late 1980s. To overcome these impediments, who in 1999 recommended the use of typhoid vaccines. Of the two licensed vaccines--oral Ty21a vaccine and injectable Vi polysaccharide vaccine--only the oral vaccine is available in India. But it is available as capsules, which makes it impractical to administer on children.

The researchers from the National Institute of Cholera and Enteric Diseases (niced), Kolkata, and the International Vaccine Institute, Seoul, carried out the clinical trial of injectable Vi polysaccharide vaccine, sold in several countries under the brand name of Tyhperix. The vaccine was given to 37,673 residents from slums in Narkeld-anga, a typhoid-endemic area. The vaccine was 80 per cent effective in children under five, 56 per cent in 5-14 year-olds and 46 per cent in adults, they said in the New England Journal of Medicine (Vol 361, No 4). The vaccine also provided indirect protection to unvaccinated residents in the neighbourhood. Unlike the oral vaccine, a single shot of Tyhperix offers protection for two years, they said. "Whether Tyhperix will be included in the immunization programme remains up to the policymakers," said Dipika Sur of niced, also part of the research. Produced by pharma giant GlaxoSmithKline, Tyhpe-rix costs US 50 cents (Rs 24) per dose.

In the late 1990s, Haffkine Institute, Mumbai, produced a similar vaccine which cost 50 paise per dose. The government had then stopped its production calling it ineffective.