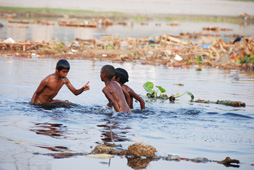 The office of the Comptroller and Auditor General (CAG) on Tuesday released its second audit report of 2013, which has exposed the poor provision of public services to the residents of Delhi. The report came down heavily on the inadequacy in water supply and the fact that more than half of the city’s sewage ends up in the Yamuna untreated.

The CAG carried out a performance audit of sewage management in Delhi to ascertain whether the agencies responsible were able to collect, treat and dispose of all the sewage generated in Delhi. This is the fourth in the series of performance audits related to controlling water pollution in the National Capital Territory. The earlier three reports were presented to the legislature in 2000, 2004 and 2005. The findings of the report highlight the “slow progress of construction of sewage treatment plants…” and other pollution abatement infrastructure.

According to the report, the Delhi Jal Board (DJB) has a capacity to treat 543.3 million gallons per day (MGD) of sewage (one gallon equals 4.5 litres), while the total sewage generated is 680 MGD. The water utility, the report says, is able to collect and treat only 367 MGD of sewage, while 313 MGD of untreated sewage finds its way into the Yamuna. Although this is correct in part, the problem is that the CAG data only factors in “official” sewage generation. This can be defined as sewage generated from areas that receive water from the water utility (thumb rule: 80 per cent of water that enters a household leaves as sewage). But this is far from ground reality. The fact is that a large number of households in Delhi have their own private borewells, as well as areas which are supplied by private vendors and tanker supply. The sewage generated in these areas is not factored into the planning process, neither does the CAG assessment. It must be noted here that the report has not measured the sewage flows, and has relied on secondary data which is a gross underestimate.

According to the Central Pollution Control Board, Delhi generates more than 4,500 million litres a day or MLD (around 1,000 MGD) of sewage. Also, even though the installed capacity is currently 2,470 MLD, only 1,668 MLD is being treated due to underutilised capacity, a fact that has been pointed out in the CAG report. According to the CAG report, Delhi treats 54 per cent of its sewage, but the percentage is a gross underestimation given that the total sewage generated is underestimated. As is evident, Delhi has the capacity to treat 54 per cent of its sewage, but only treats 37 per cent; approximately 2,900 MLD is discharged into the Yamuna each day.

According to the report, DJB laid 900 km of sewer line in the capital between 2007 and 2012, on which it incurred an expenditure of Rs 1,634.18 crore, but added only 1 MGD capacity of sewage treatment. The CAG performance audit conducted during August-November 2012, covers the period April 2007 to March 2012. The report also noted that the DJB could not utilise the grants-in-aid received under the Jawaharlal Nehru National Urban Renewal Mission during 2010-11 (100 per cent) and 2011-12 (51 per cent), adding that “test check of records at 15 out of 32 sewage treatment plants or STPs (domestic and industrial) revealed that all STPs were working below their capacities.” The actual utilisation of seven domestic STPs was checked. All were found to be working below par, and overall utilization was only 53 per cent of the total capacity (see table). The report correctly points to the fact that large amounts have been spent in creating treatment plants in sparsely populated areas and has failed to set up the requisite conveyance systems. DJB has accepted the audit observations.

The CAG reports has also been critical of the interceptor sewage scheme of the DJB, which was tendered in 2007 at a cost of Rs 1,395 crore. The scheme was expected to cover 30 per cent of the population and conveyance of the same to treatment plants. According to the report findings, while the tender was awarded in June 2007, the works were awarded only in July 2011. The Centre for Science and Environment (CSE), a Delhi-based research organisation, too, has been critical of the scheme. This is because the agency concerned has not learnt from the failures of the Centre’s river action plans. The project, as the proponents themselves have agreed to, will not restore the river to even bathing water quality or having a biological oxygen demand or BOD (an indicator of organic pollution) of less than 3 mg/l, as ordered by the Supreme Court of India. The DJB has defended the project saying that it would take twenty years to increase sewer length from the current 6,500 km to the requisite 9,500 km. The proposed 59 km of interceptor sewers would divert all untreated sewage being discharged into three major storm water drains carrying three fourths of the city’s wastewater, and therefore bring down the pollution load significantly. DJB says that on completion of the project, the BOD of the river will reduce from 41 mg/l to 12 mg/l (for bathing, BOD should be less than 3 mg/l).

Outside the purview of the CAG reports is the sewerage master plan 2031, which the Delhi government announced in 2011. As per the plan, Rs 25,000 crore will be spent to revamp the city’s sewerage system. According to an analysis by CSE, the consultants, as in the case of the CAG, have underestimated the sewage generation factor. So even after the massive expenditures, the treatment capacity in 2031 will inexcusably remain insufficient to deal with the sewage generated today (See Cash clogged, January 31, 2012).

How to manage water better

Another chapter within the report was a thematic audit of water management in Delhi. According to the audit, the raw water is not sufficient to meet Delhi’s demand, and points to the fact that even after a lapse of 18 years, and incurring an expenditure of Rs 214 crore, two dams proposed on the Yamuna are yet to be constructed. Considering per capita requirement of 60 gallons per day, the current requirements works out to 1,025 MGD. The average supply in 2009-10, 2010-11 and 2011-12 was 800, 835 and 818 MGD respectively. The shortfall is being met through private borewells and private vendors. CSE argues that if rainwater harvesting is carried out in earnest and a reuse master plan for treated sewage is worked out, the justification for more dams in the upper catchment of the Yamuna will weaken.

The CAG report makes several valid points regarding leakages in the system, lack of monitoring and measurement, and importantly the non-removal of silt from Yamuna at Wazirabad pond. The pond, which is the source of water for Wazirabad and Chandrawal water treatment plants, can reduce its holding capacity due to the deposit of silt to the extent of three to four feet. The last time the pond was dredged was in 2006. DJB replied to the CAG saying that “…not much expertise exists in Delhi”. The CAG reports says that, “the reply is not convincing as dredging was carried out earlier also in the year 2006.”

The thematic audit also points out that 24.8 per cent of Delhi’s population is being supplied 3.82 litres per capital daily, far less than the minimum stipulated average or the 40 litres minimum established by the World Health Organisation. DJB has argued that this supply via tankers is an emergency measure and used only to meet drinking water requirements. CAG carried out a study of the command area of the Nangloi plant, one of the six treatment plants for Delhi, and here too the auditors found iniquitous supply, ranging between three litres to more than 220 litres per person per day (see table below). DJB has defended this by stating that “large number of unauthorized growth in unplanned colonies came up in the West and South West Delhi due to which the water supply in its command area became un-rationalised.”

The CAG report also made note of the lack of reliable data and the absence of broad water metering, which raises questions of how can one manage something one does not measure. To indicate the potential loss in revenues, less than 40 per cent of water produced was billed during last three years. Also, 679,000 connections (35 per cent) of the 1,964,000 water connections in the city are without functional meters. DJB has plans to install 800,000 new meters, but the deadlines for these projects remain unclear.

The city agency has begun to consider reuse of treated sewage and is planning to implement a project to convey treated water two kilometre upstream of its intake point at Wazirabad to reduce demands on freshwater withdrawals. This is welcome. But much is desired in their water management and sewerage master plans to ensure that freshwater is released to allow the river to flow, and no sewage is discharged without treatment into the Yamuna.