Bats, largely elusive till now, are slowly revealing their secrets as scientists record and analyse their calls 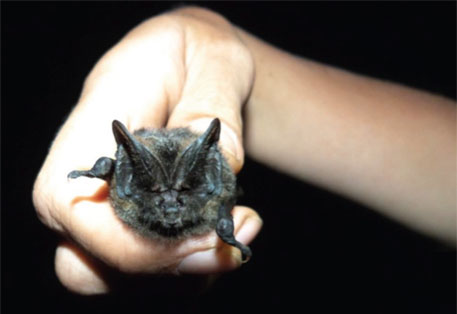 Unlike their terrifying reputation, bats are key species that maintain the ecosystem by helping in pollination, controlling insects and keeping rodent populations in check. But these guardians of the night are sensitive to changes in the environment. With their habitats being fast destroyed and food sources shrinking, monitoring them is a good way to know what is happening to the environment.

But studying them has been tricky since bats are difficult to catch. Researchers are now relying on a unique method to understand the nocturnal species better. Bats make pips and squeaks and listen to the echoes to visualise their environment. Each species has its own distinct echolocation call. An increasing number of scientists are recording and analysing these calls to understand bats’ distribution behaviour. They say the method is not only faster and suitable for larger areas, it also protects the species from unintentional transfer of diseases, such as white-nose syndrome caused by a fungus during capture. Such studies also indicate the changing behaviour of bats in changing environments.

Using echolocation calls, researchers from Israel’s Ben-Gurion University and the UK’s University of Bristol have found that bats in Israel’s Arava and Judean deserts are changing their foraging methods during extremely hot and dry summers, when finding prey becomes difficult. This phenomenon was accompanied by a change in calling behaviour. Bats that usually forage on the ground and emit sounds at 75 decibels, changed their diet to flying insects. Their calls also changed to 119 decibels and resembled those bats that prey on flying insects. The study was published in the Journal of Experimental Biology in September.

While echolocation calls are an effective tool, a database of bat calls is required for cross-referencing. Scientists in Europe have developed one such tool, iBatsID, which has recorded calls of 34 European bat species.

The tool is available online for free. Researchers are now trying to prepare a database of calls for India’s Western Ghats. The biodiversity hot spot hosts 43 per cent of the 117 bat species found in the country. But over the years, the region has become densely populated. Portions of the hills have been blasted to make space for settlements and buildings have come up near caves.

It is imperative to understand the impact of these changes on bats. Between 2008 and 2013, researchers from the UK’s University of Leeds, Bengaluru’s National Centre for Biological Sciences and Mysore’s Nature Conservation Foundation of India studied bats in the Valparai plateau of the Anamalai hill range. They captured bats from fragmented forests, coffee, tea and cardamom plantations, along rivers and from roosts in tunnels and caves. They were identified and their echolocation calls were recorded. The researchers found that in some cases, calls of the same species differed from those published in other areas. The team recorded echolocation calls of five species for the first time and identified a species, Eastern barbastelle, which was so far thought to be restricted to temperate forests. The researchers also found two more species that were not thought to be found in the area. “This underlines how much we still have to learn about the distribution and ecology of bats,” says Claire Wordley of the University of Leeds’ Faculty of Biological Sciences and lead author of the study (see interview). The study was published in the latest issue of Acta Chiropterologica.

Another group of researchers is also recording bat calls in Kudremukh National Park. Their findings show that species of bats could be classified accurately to the extent of 91.7 per cent based on their calls. The study was published in the August 25 issue of Current Science. Lead author, H Raghuram of The American College, Madurai, says, mapping echolocation calls of species to their respective sites will give an idea where they live. So if you want to construct a road or wind mill, it can be planned to avoid areas where bats live. This is one way of conserving them, he adds.