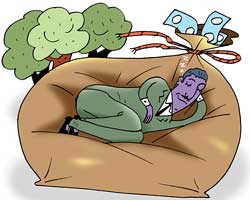 Rs 11,000 crore to go to states for afforestation

THE Supreme Court has ordered that Rs 11,000 crore, collected for diversion of forestland for non-forest uses, be released to state governments. States in India have long fought the Centre to recover the money they gave to the compensatory afforestation fund. Collected over seven years, the money has been lying idle because the states and the Centre disagreed over controlling the money.

The money came under Central control, via a Supreme Court intervention in 2002, because the states had not utilized the money. The states alleged that the Centre retained far too much control in its earlier plans (see 'Why states are against campa?' Down To Earth, January 15, 2006).

The apex court ordered the Rs 11,000 crore will be released in phases; Rs 1,000 crore every year for five years.Each state will get an amount proportionate to its contribution. An ad-hoc compensatory afforestation management and planning authority (campa), appointed by the court in 2006, will disburse the funds.

The order came on July 10 after the Union environment ministry consulted states and formulated guidelines for using the money in March. The guidelines were revised after Jairam Ramesh took charge as the minister of state for environment in May.

The revision happened because the ministry wanted more control. The Centre will have an advisory council to monitor how states spend funds. It will also frame guidelines and arbitrate in any inter-state dispute. Ramesh will head the council.

Each state will also set up its own campa and funds will be channelled through it. The state-level campa will be three-tiered, with governing, steering and executive committees (see box). "If these committees get their act together, we will transfer the money, including interest (after five years) and let them control it. Then the Central ad-hoc committee will be dissolved," said Ansar Ahmed, member of the ad-hoc campa and inspector-general of forests in the environment ministry. The government will also coordinate compensatory afforestation plans with the National Rural Employment Guarantee Scheme to boost employment.


The Comptroller and Auditor General (cag) of India will audit both the ad-hoc campa at the Centre and the state-level campa bodies. The Union ministry or state governments can call for a performance audit if they feel it is warranted. "Since the money in campa is public money, cag should audit," said Rajeev Dhavan, a supreme court advocate.

The central empowered committee (cec) that advises the Supreme Court on forest matters has often disagreed with the ministry on how the funds should be managed.

But it accepted the latest plan. "We are content with the ministry's guidelines on campa. It conforms to most of our recommendations," said a cec member.


States are not quite sure how the money will be disbursed. Some are under the impression that they will get back their money at one go. "The Supreme Court has ordered all money be returned to the states, and that is what the ministry is doing," said P B Gangopadhyay, principal chief conservator of forests, Madhya Pradesh.

Karnataka is content to know that it will get its share of the fund. "There is no problem in the disbursal mechanism. We don't mind the instalments," said S Nagaraj, principal chief conservator of forests in Bengaluru.