Sootprinitng is the eco-sleuth's new weapon for identifying the source of air pollution by setting up a databank on various types of soots to help Policymakers frame stricter norms for emissions, especially for the manufacture of cars, automobile lubricants and gasoline 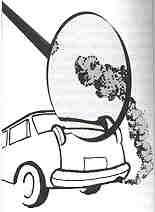 JOHN Van der Sande, professor of material science at the MIT and his team are using a new technique to compile information on all types of soot. This knowledge will be used to detect the exact sources of pollution. The library of sootprints will be based on the molecular structure of the particles emitted from wood-burning stoves, diesel trucks, factories and power plants.

The airn of the project is to help policymakers formulate even more effective environmental regulations and make it easier to catch polluters. "I want to be able to tell you the details of the specific engine manufacturer, Lising a particular lubricant and burning a certain fuel," says Van der Sande about sootprinting. Sootprints even look like fingerprints with white circles strewn with distinctive patterns of short black lines. A year's research has achieved 15 soot signatures from a single diesel engine for Van der Sande and his colleague Adel Sarofim, a professor of chemical engineering at the MIT.

Soot, which is also called particulate matter, has been termed "a deadly threat" by the American Lung Association. People who work long hours in close association with soot are prone to cancer and have to contend with innumerable respiratory tract disorders. Till date, Studies on soot have focussed on its chemical structure and trace metal content. Now, Van der Sande and his group has received a US $ 100,000 federal grant for analysing the physical structure of soot particles. Soot from one source differs from another as the spacing of certain carbon atoms in them varies.

MIT researchers have begun their documentation of sootprints with the particulates derived from diesel fumes. Particulate matter derived from diesel is hard to differentiate and tracing it back to its source is not an easy job. Clear distinctions cannot be drawn with the standard techniques available today. Van der Sande and Sarofim are using a US $2 million high-resolution transmission electron microscope. The electron microscope uses a beam of electrons to study a sample while a regular microscope employs light rays. The image prochIced by the electron microscope is digitised and then run through a computer programme. This allows the genciation of a sootprint based on the spacing of carbon atoms. Alongside the production of a soot print, trace elements are also simultaneously analysed. The study of these elements serves to establish further distinctions between one soot sample and another.

The biggest obstacle to the research project comes in the form of the infinite H umber of sources of soot to be traced in the case of air Pollution. In Los Angeles alone, there are 70 major types of emissions, contends Glen R Cass, professor of environmental engineering at the California Institute of Technology in Pasadena, US. Thus, such a soot library can be compiled only by an cxhaustive study. But once the mission is complete, the emission of smoke would certainly be a crime.