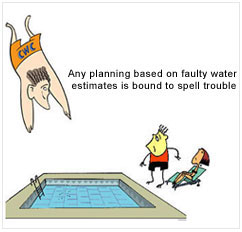 If the government is to be believed there is enough usable water in the country to meet projected demand until 2050. Stumped by this claim, scientists at iit Delhi and Jamia Millia Islamia, New Delhi, pored over official calculations for estimating the country's water resources. They say the government has overestimated its usable water resources by at least 66 per cent.

How could the estimate be so grossly inflated? "The government bodies have ignored the interaction between surface and ground water and calculated the groundwater that comes to the surface and flows in the river twice. Hence usable water resources estimated by it are much higher than the actual amount," says N K Garg, professor, Department of Civil Engineering, iit.Garg, along with Q Hassan of Jamia Millia Islamia, has contested government claims in a paper published in Current Science, October 10, 2007.

The Central Water Commission (cwc) estimated in 1988 the total utilizable water in the country at 1,110 billion cubic metre (bcm), which is more than the projected demand of 897 bcm in 2050. "We have estimated the utilizable surface water from the data collected at 945 hydrological observation stations in the country. This came to 690 bcm. To that we have added 418 bcm, which is the utilizable groundwater estimated by the Central Ground Water Board (cgwb). Within these calculations we have already subtracted the groundwater that comes to the bed of the river. Garg is asking us to subtract it twice which is not correct," says S K Sinha, chief engineer, Basic Planning, cwc.

Garg stresses that cwc has not been able to explain its surface water estimate of 690 bcm and doubts it was taken from observation stations. "It is the same figure as used by the National Commission on Agriculture (nca) in its 1976 estimates. I have shown this by matching the figures basin-wise," he says.

Using the latest available data for live storage, recharge through irrigation and rainfall to get a more accurate estimate, Garg calculates India's total usable water resources to be 668 bcm. "I have used cwc data. I have not used any new method of calculation. It is the same conventional method that is used. I have only shown that they have made a mistake in conventional calculations," says Garg.

While agreeing that government estimates are erroneous, other experts doubt that the margin of error is as much as claimed in the paper. They have called for re-examination of data and how they are arrived at. Ramaswamy Iyer, former secretary of cwc, says, "There was a difference of opinion on whether the available water registered at the terminal points of the river systems included the estimate of groundwater availability. It would indeed be wrong to add the two numbers because some of the groundwater finds its way back to surface water flows. What is not clear is how much. So far as I know, definitive answers to these questions are not available. My recollection is that the discussion on these matters in the commission was inconclusive."

Himanshu Thakkar of South Asia Network on Dams, River and People, an ngo working on problems related to water resources, questions Garg's paper for uncritically accepting the nca estimates and using outdated (1997's) data for usable storage capacity of reservoirs. Garg, however, says he used whatever data was available.

Thakkar also points out other flaws in the method of calculation. "The analysis wrongfully assumes that reservoirs will be filled to 100 per cent capacity and that 20 per cent will be (evaporation) losses. This is rather too simplistic. Also, a storage is used multiple times, getting filled even as water is being used, and there are inflows after the monsoon as well. Thus, a 100 million cubic metre storage could provide water up to 200 million cubic metres if inflows are available," he adds.

Scientists want the data to be scrutinized. "We should look at how the figures are arrived at. Besides, there should be more transparency in collection and dissemination of data," says A K Gosain, professor at the civil engineering department of iit Delhi. The flow data of many river basins, including the Ganga, Brahmaputra and Indus basins, is confidential. This, says Gosain, hampers researchers in calculating water usage. So does lack of regular updates on impacts of climate change, new hydrological projects and dams, and changes in water usage.

Some steps are being taken to address these issues. Gosain says a new sub-committee under the Climate Change Committee of the environment and forests ministry is studying the change in rivers' hydrological flow. A new project under him has begun studying the usage patterns by dividing river basins into smaller components and identifying the users in these watersheds.

Accurate estimate of the quantity of water, however, is not enough. The quality of water is equally important in assessing usable resources. "No attempt is being made to quantify good quality water," says Gosain. It is crucial for sound planning.