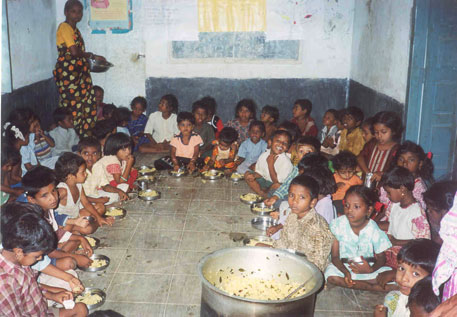 The Comptroller and Auditor General (CAG) of India has found many shortcomings in the Centre's Integrated Child Development Services (ICDS) programme. The report says the programme suffers from unrealistic budgeting, diversion of funds and non-implementation of programmes because of which India has been unable to meet its goals of improving children's health and education. The report, tabled in Parliament on Tuesday, also said that the monitoring unit under scheme failed in its duty. CAG has recommended periodical monitoring of the scheme by launching a central supervision mission with wide representation from civil society to plug the loopholes.

The report has found that anganwadi centres meant for infants and young children suffer from poor hygiene and sanitation, unavailability of medical kits, weighing machines and staff shortage. The report also states that data on nutritional status of children had several discrepancies. Lack of proper coordination among different ministries also led to poor implementation of the programme, it adds.

The CAG audit checked 2,730 anganwadi centres in 67 districts of 13 states, including Bihar, Chhattisgarh, Gujarat and Haryana in 2006-07 and 2010-11. They were scrutinised for three services: supplementary nutrition, pre-school education and health and education under this scheme.

India fared very poorly in child health with reference its own set targets and in comparison to neighboring countries, says the report (see table).

As per a Supreme Court directive, Central and state governments had to operationalise 1.4 million anganwadis by December, 2008, but they fell short of target by 54,000. Similarly, of 7,075 sanctioned ICDS projects, 7,005 were  operationalised.

Twenty-five per cent anganwadis were functioning from kuchcha houses, or open/ partially covered space. Nearly 65 per cent of centres had no separate space for storage facility and indoor and outdoor activities for children.

The anganwadis were found to be unhygienic as half of them had no toilet facilities and 32 per cent had no drinking facilities.

Nearly 53 per cent of centres had not received flexi-funds from state governments.

The central monitoring unit under this scheme failed to carry out concurrent evaluation and monitoring through the progress reports received from states. As much as Rs 57.82 crore was diverted to activities not permitted under the ICDS in five of the test-checked states and Rs 70.11 crore was parked in civil deposits ledger account, resulting in blocking of funds.

The chief auditor the country has recommended proper implementation of the scheme among SC, ST, OBC and minority communities and periodic evaluation and monitoring so that timely action can be taken.