Over wood as cooking fuel 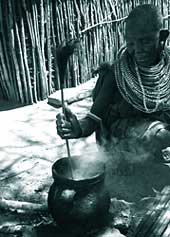 if people in Africa were to switch to charcoal as cooking fuel from wood, it would not only significantly reduce greenhouse gas (ghg) emissions but also save millions of lives, claim researchers. Led by Dan Kammen of the University of California, Berkeley, the scientists calculated the health and environmental effects of moving to new fuel-use and land-management strategies either gradually (over the next 50 years) or rapidly (within 10 to 15 years).

The study suggests if current trends in fuel use in sub-Saharan Africa continue, the number of premature deaths among women and young children exposed to wood smoke from stoves will reach nearly 10 million by 2030, from about 400,000 in the year 2000. What's more, cooking fires will pump 6.7 billion tonnes of carbon into the atmosphere as ghg s in the next 45 years, they say (Science, Vol 308, No 5718).

Although charcoal is the leading urban fuel in Africa and releases less indoor particulate matter when burned than wood, its use does not find much support from policy-makers or environmentalists. This is because charcoal is made by covering a stack of wood with dirt and allowing it to smoulder for three to seven days -- a process that is inefficient and polluting. On the other hand, charcoal production generates rural employment and so could be a blessing in poor regions.

The researchers' model predicts that a shift to burning charcoal, combined with sustainable forest management and more efficient charcoal-production technologies, would avert some 3 million premature deaths and reduce ghg emissions by 65 per cent if implemented rapidly. Even if adopted gradually over 50 years, the move would delay 1 million deaths and cut ghg emissions by 45 per cent, relative to simply carrying on as usual.