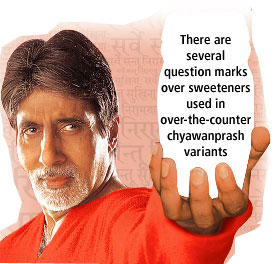 "Our product offers an excellent nutritional formulation, especially to calorie-conscious, diabetic, obese and overweight people," said Malvinder Mohan Singh, ceo, Ranbaxy. Other than the sweetener, the product also has sorbitol. The Dabur version uses this chemical as well to provide bulk.

In its classical form, chyawanprash is a mix of herbs, minerals, crystallized sugar and ghee with honey. It stands to reason if the tonic's constituents are changed, the product may not work as well. Ranbaxy's spokesperson maintains that Chyawan Active provides the same benefits as the classical chyawanprash since it has the same constituents.

But there are question marks over artificial sweeteners. Sucralose, a chlorinated version of sucrose has, for instance, been shown to shrink the thymus gland and enlarge kidneys and liver. Consumer groups and experts say the chemical, used in Jeevan Prakash as well, has not been studied adequately. Sodium saccharine, used in Dabur's Chyawan Prakash, is less suspect, mostly because it's been used for a long time.

Besides, the sorbitol in Dabur and Ranbaxy's version of chyawanprash, has been linked to diarrhoea and eye problems. The products have unspecified amounts of this chemical.

Use of chemical additives add a new dimension to the practice of deviating from classical ayurvedic recipes. Past modifications to chyawanprash include adding gold and silver dust to the tonic. But these were still substances recommended in ancient texts, albeit for other remedies. Such modifications were also permitted under the Drugs and Cosmetics Act, 1940. Use of chemical additives is a recent practice, facilitated by a 2005 amendment to the rules of the Drugs and Cosmetics Act. Some senior officials at the Union Ministry of Health and Family Welfare's Department of Ayurveda, Yoga and Naturopathy, Unani, Siddha and Homoeopathy (ayush) insinuate that the amendment allowed chemical additives under pressure from industry. But one official said the "use of the sweetener was allowed after consultation with the ministry's ayurvedic pharmacopeia committee".

There is another concern. State drug controllers are supposed to examine safety data provided by companies before issuing manufacturing licences. But experts say this doesn't happen because the state authorities don't have the capacity to analyse the data.

Companies like Ranbaxy and Dabur tend to see the use of sweeteners as an innovation necessary to retain a foothold in the Rs 250-crore chyawanprash market. But ayurvedic practitioners deride the practice as misbranding. "A company that modifies a classical recipe should not derive sanction from ayurveda. It should have the conviction to say that it has developed a new remedy," says Balendu Prakash, an eminent ayurvedic physician. Ancient texts do not prescribe chyawanprash for diabetics, he adds, in obvious reference to products that use sweeteners.

Misappropriation of classical chyawanprash recipes came in for special discussion at a meeting of ayush's Ayurveda Siddha Unani Drug Technical Advisory Board on December 6, 2007--the minutes of which are with Down To Earth. Much of the discussion centred on the use of prefixes like 'chyawan' that suggest a link with classical ayurveda. The drug controller general of India said that the practice constitutes misbranding according to the drugs and cosmetics act. It was suggested that state licensing authorities review products that draw their names from classical remedies and give companies 30 days to mend matters. The meet also suggested reviewing licences of chyawanprash variants with gold and silver.

Industry is unrepentant. Ranjit Puranik, general secretary, Ayurvedic Drug Manufacturers Association, says firms have made proper distinction in names and consumers have been told of differences with classical recipes.

S Madhavan, advisor to ayush, says an order censuring misbranding units and revoking licences if they do not change brand names is awaiting the health minister's approval. But he isn't sure it will change things substantially.