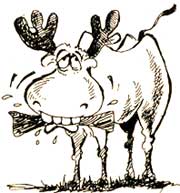 THE "arms race" between plants that produce defence mechanisms to ward of foragers such as deer and animals who attempt to evolve mechanisms to counter these defences, have long intrigued evolutionary biologists.

Scientists say the moose (Alces alces), a large herbivorous mammal found in temperate regions, appears to be leading (Trends in Ecology and Evolution, Vol. 7, No. 1), because it can survive on birches, which have low nutritive quality, and it has a digestive system that can deal efficiently with plant toxins. Its choice of forage is determined by the amount available and its energy content.

However, plants have not simply withered and given up the fight. Toxic compounds reduce the amount of plans that a moose can eat, totally excluding some plant species from its diet and modifying the choice of its feeding habitat.