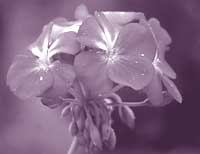 a new research could offer vital clues in combating attacks by herbivorous insects. According to a research done by chemical ecologists at the New York-based Cornell University, the chemical compounds of flowers not only guide pollinating insects but also prevent herbivorous insects from eating the reproductive parts of plants. According to the researchers, even before a flower bud opens, the compounds called dips (dearomatized isoprenylated phloroglucinols), protect the plants' reproductive system by killing or deterring herbivorous insects (www.newswise.com, November 18, 2001). "Now that we know where to look, anti-feedant chemicals like dips undoubtedly will offer clues to more natural insect control agents," said Thomas Eisner, Cornell's Schurman professor of chemical ecology.

The finding follows 30-year-old studies by Thomas Eisner and by Maria Eisner, a senior research associate at the university's department of neurobiology and behaviour. Both studied the floral 'nectar guide' patterns that only creatures with vision in the ultraviolet part of the spectrum can see. Besides targeting on the part of the flower where nectar and pollen occur, the distinctive patterns are believed to also help insects recognise a familiar flower among a field of competing images.

"But we had a nagging suspicion that the ultraviolet-absorbing pigments had other functions for the plant," says Alexander Bezzerides, a graduate student at the university who participated in the research. Adding to their suspicion was the finding that the compounds were particularly prevalent in plant ovary walls as well as in other reproductive structures.

Therefore, the Cornell biologists and chemical biologists decided to conduct an experiment on caterpillars and Hypericum scalycinum , a native of southeastern Europe. While Mathew Gronquist, another graduate student at the university, performed analyses that led to isolation of the chemical compound, the biologists devised feeding studies. They offered filter-paper discs soaked with the plant chemical compounds to larvae of the Utheisa ornatrix moth (rattlebox moth). Then the caterpillars were offered paper discs also soaked with dip chemicals. The ultraviolet-absorbing chemicals deterred most of the caterpillars. But the dips were lethal to those that sampled the chemical-laced paper. According to the ecologists, the experiments showed that dips contribute to the ultraviolet pattern in flowers and serve as an anti-feedant, with potentially lethal consequences.