Harnessing solar energy has been a long-standing scientific goal. The latest approach employs chemicals that, like the leaves of a tree, soak up solar energy for use later 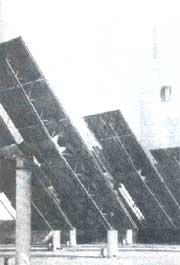 PLANTS have been doing it for millions of years now, but it is only now that scientists are tasting success in trapping the sun's energy in chemicals and then using it to produce fuels.

However, producing power using photovoltaic cells is certainly not cheap: they require lot of space, for one, and they are unable to store energy. Scientists such as Israel Dostrovsky of Israel's Weizmann Institute of Science point out that in most cases, panels of these cells are not set up where the energy is required, making it necessary for it to be transmitted over a distance, leading to energy loss and other problems.

So, taking a cue from plants, scientists are trying to devise chemical means to capture sunlight. Although scientists are yet to fully understand photosynthesis, they are using similar principles to develop what they call photoelectrochemical (PEC) cells to trap solar energy. They hope to trap solar energy in an electrolyte -- a chemical that can conduct electricity -- and then use it when needed.

Says Balu Venkataraman, formerly of Bombay's Tata Institute of Fundamental Research, "There has been globally a vigorous attempt to find new ways to use sunlight for the production of chemical fuels from abundant and cheap materials such as nitrogen, carbon dioxide, water, and even sand." However, he cautions against overenthusiasm, saying, "We are far from realising molecular photosynthetic systems which would ape nature with high efficiency and high turnover."

PEC cells are classified on the basis of the chemical reactions they depend upon and include regenerative PEC cells, photocatalytic cells and photogalvanic cells.

Regenerative PEC cells are analogous to photovoltaic cells. They convert solar energy directly into electricity, but, unlike in photovoltaics, the semiconductor is immersed in an electrolyte that transmits the electric charges. No new chemical is produced in such a cell. A number of such cells involving different semiconducting materials such as silicon and tungsten selenide have been produced with efficiencies ranging from 10 to 15 per cent.

Changing the semiconductor-electrolyte pair can alter the efficiency of PEC cells. Scientists at the department of chemistry at the Varanasi-based Banaras Hindu University are involved in several such attempts. O N Srivastava and his BHU team found that when a tungsten selenide semiconductor was treated with nitric and hydrochloric acids -- to prevent it from being eroded when exposed to sunlight -- its efficiency increased from 8.3 to 17.1 per cent.

Scientists are also exploring methods to produce energy-rich compounds using solar energy. Japanese scientists A Fujishima and K Honda demonstrated in 1972 that solar energy could be used to split water into hydrogen and oxygen. The process involved converting solar energy into electricity and then passing it through water. Several scientists worldwide are trying to develop efficient methods of producing hydrogen, an efficient fuel, in this manner. Moreover, on combustion, hydrogen only produces water, and so is gaining popularity as a "zero emission" fuel. Additionally, it can be conveniently stored and transported.

Already, a plant to produce hydrogen gas has been set up in Saudi Arabia with German assistance. Known as the HYSOLAR project, it is capable of generating 350 kilowatts of energy.

But, using PEC cells to produce hydrogen is not without problems.So far, no group working in this area has reported an efficiency of more than 12 per cent in producing hydrogen. Scientists are also exploring the possibility of using solar energy to decompose hydrobromic acid and sulphuric acid to produce hydrogen.

Scientists are also using solar energy to produce chemicals needed for industrial and other uses, thereby saving on other valuable forms of energy. Photocatalytic cells can harness solar energy to activate certain chemical reactions such as synthesis of ammonia from nitrogen and hydrogen, or the production of hydrogen from hydrogen sulphide gas. Titanium dioxide when exposed to sunlight can catalyse the conversion of nitrogen and hydrogen t ammonia. Several other photocatalytic systems are also being developed using different metal oxides. Scientists at the Central Salt and Marine Chemicals Research Institute, in Bhavnagar, Gujarat, are actively involved in the development of appropriate semiconductors. Explain N Nageswara Rao and P Natarajan of the Institute, "Substantial progress has been made in (this field) on the bench scale. (But) a lot more work has to be done before any commercially viable system can be developed."


A PEC cell that has good prospects of being developed into a commercially viable cell in the near future is the photogalvanic cell. Scientists at the Swiss Federal Institute of Technology led by M Gratzel have designed a photogalvanic cell with an efficiency of over 10 per cent. Photogalvanic cells consist of metal electrodes and light-absorbing dyes in solution, and have usually not had efficiencies greater than 0.01 per cent.

The cell developed by the Swiss team uses a combination of a thin film of titanium dioxide and a light-absorbing ruthenium cyanide-based dye. These materials are low-cost and have considerable potential. The efficiency and stability of this cell is comparable to those of the best known silicon-based photovoltaic cells, claim Gratzel and his colleagues. Also called "artificial leaf cells", these can be mounted on window panels for the direct and economical conversion of solar energy to electricity.

However, in all types of PEC cells, the chemical trapping of solar energy is limited by reactions proceeding in the reverse direction, re-producing the starting materials. The Swiss team has successfully overcome such problems and claim that their cells can convert as much as 15 per cent of the solar radiation received into electricity. Scientists calculate that if these reactions are completely controlled, PEC cells could be made to achieve efficiencies of as much as 39 per cent.

According to J Barber of the photosynthesis research group at London's Imperial College of Science, Technology and Medicine and B Andersson from Stockholm University, "Intially these technologies are likely to be limited to the construction of micro-optoelectronic devices for specialised use, but in the longer term a low-cost power generating system may be developed, allowing us better to exploit solar energy."