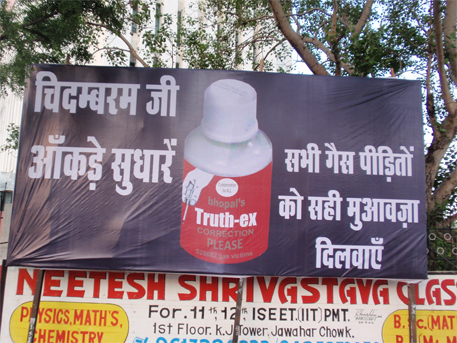 Union home minister P Chidamabaram's visit to Bhopal on June 5 was short and left the 1984 gas disaster survivors' organisations disappointed. Chidambaram is the chairperson of the group of ministers on Bhopal gas disaster-related matters.

The visit was scheduled following a series of court orders and was intended to explore viable options of dealing with contamination and the hazardous waste present at the defunct Union Carbide pesticide plant in Bhopal. The visit barely lasted a couple of hours. Hundreds of survivors gathered to meet the minister who visited the city for the first time since the formation of the present group of ministers looking at all issues related to the December 1984 gas leak.

Chidambram, whose visit revolved around the Bhopal Memorial Hospital and Research Centre, held an hour-long discussion with media persons at a five star hotel in Bhopal and promised to fast-track and upgrade the hospital.

The minister's visit was meant sort out problems relating to disposal of the hazardous waste lying at the plant. The group of ministers, earlier in May, got in-principle approval from the Central government to dispose the 350 metric tonnes of waste in Germany. For this purpose, a German public-sector enterprise, GTZ, has submitted a detailed project report to the Madhya Pradesh government on June 4. The final decision regarding sending the hazardous waste to Germany for incineration will be taken on June 8—the next scheduled date of meeting for the group of ministers.

Promises to meet survivors in Delhi

“He met just six of us for barely five minutes promising to give us further time. But many promises like this have been made,” says  Nawab Khan of Bhopal Gas Peedit Mahila Purush Sangharsh Morcha. He adds that in the brief meeting at the hospital he, along with other representatives, requested that they be given 20 minutes with the group of ministers to present their case. “We can prove why we are asking for more compensation, and today we presented the chairperson with a memorandum,” he says. Khan says that the minister has promised to give time to the organisations in Delhi, but is not very hopeful.

The memorandum makes three demands—make corrections in the 2010 curative petition  which is pending before the Supreme Court; swift and proper disposal of the 350 metric tonnes of toxic waste laying at Union Carbide's abandoned factory; and environmental rehabilitation and compensation for toxic contamination. “So far, everyone is focussing only on the waste lying at the site, but they need to address the issue of contamination caused by the leaked gas and this hazardous waste,” adds Khan.

This was Chidambram's first visit since he became the chairperson of the group of ministers in June 2010. Rachna Dhingra of non-profit Bhopal Group for Information and Action says the minister spent more time with media persons discussing Congress matters than he did with the survivor organisations who had gathered in hundreds to meet him. Tired of the non-responsive officials, Dhingra adds that children who had gathered to present the minister with erasers as a symbolic gesture to correct the curative petition were not permitted into the hospital compound as they were deemed a security threat. “June 7 will mark second anniversary of the contentious trial court order, following which the group of ministers was reconstituted and a curative petition was filed in the Supreme court.