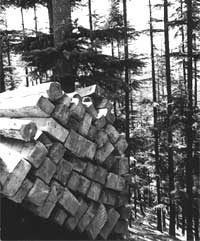 An emergency fund to pay for forest protection is in the pipeline in China. According to the Chinese government, the first stage will involve a one-billion-yuan package supplied by the Finance Ministry for maintaining 13.3 million hectares of forests in 11 provinces this year.

Logging has been banned in ecosensitive areas in China and the government has spent 20 billion yuan on educating people, replanting and preservation. Zhou Shengxian, the head of the State Forestry Bureau, said that the government's move reflected the realisation of the officials about the ecological role of forests. "This is a turning point for China's forests, an area that has been under-funded for too long," Zhou said.

However, budget planners have indicated that the funding arrangement for forest protection could be temporary. It is argued that China's Forest Law states that forest protection should be paid for by the people who benefit directly from the trees and that it is not the state's problem.