Yet another white paper but little work on the ground 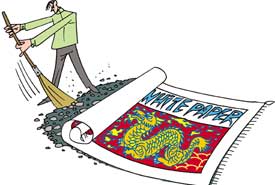 In the first week of June 2006, the Chinese government released a "white paper" on environment protection, which listed the steps that the government has taken to curb environmental degradation in China and also the success that it has achieved.

A week later, on June 12, an overloaded truck carrying 60 tonnes of toxic coal tar fell into the Dasha River in the Shanxi province. The incident went unreported until four days when stench and contamination of the cancer-causing chemical made it impossible to keep the incident under wraps. Officials scrambled to clean up as the contamination threatened a reservoir that supplies water to 10 million people. Although authorities averted the disaster, there was, however, no respite for the Dasha whose banks are heavily polluted and all its life forms dead.

The 45-page document Environmental Protection in China (1996-2005) candidly admits that the situation of environmental protection in the country is "grave". "Since the late 1970s, China's economy has developed rapidly and continuously. During the process, many environmental problems that have haunted developed countries in different phases of their 100-year-long industrialisation have occurred in China and all at the same time," the report states. "The conflict between environment and development is becoming ever more prominent. Relative shortage of resources, a fragile ecological environment and insufficient environmental capacity are becoming critical, thus hindering China's development," it adds.

Pan Yue, vice-chairman of the Chinese State Environment Protection Agency (sepa), said: "Two-fifths of the seven major rivers basins in China are polluted, and 90 per cent of rivers running through cities also suffer from severe pollution. Over 300 million rural residents do not have access to pure water, one-third of the Chinese territory because of the effects of acid rain, and two-thirds of our people suffer due to poor air quality."

According to Zhu Guangyao, senior official at sepa, "Pollution costs China more than us $200 billion each year, which roughly amounts to 10 per cent of the country's gdp."

Even as the government churns out policies and programmes and increases spending to control the degrading environment, widespread environmental pollution in the country is taking a heavy toll. According to official estimates there were 76 major pollution incidents in the past eight months.

To enable the steps that the government wants to take to reduce the level of pollution, the governance systems -- especially at local levels -- will have to deliver. Local officials do not implement the central government guidelines because they are obsessed about climbing the growth trajectory. In the pursuit of achieving an 8 to 10 per cent annual growth rate, China has become one of the most inefficient users of energy in the world.

"Our energy consumption per unit of gdp is six times that of the us and 3.8 times that of India. Pollution in China is about 12 times the world average," Yue says. Two-thirds of the energy comes from coal. China has one of the highest accident rates, per tonne of coal mined, in the world. An accident that occurred on May 18, 2006, in Zuoyun County, Shanxi, exposed the loopholes of the coal mining sector and the environment-control regime in the country.

With 57 miners trapped, local officials got busy in trying to cover up the incident. The first thing the mine owner did was to transfer the relatives of the trapped workers out of the area. Investigations showed that the cause for the accident was illegal activities. "Mine owners made workers mine in unauthorised areas. They exceeded production quotas by up to 10 times, and employed more workers than could safely be accommodated," said Stephen Frost, senior research fellow at the City University of Hong Kong and director of Corporate Social Responsibility Asia. "Even signs of flooding were ignored by managers who ordered miners to stay on the job. And rescue equipment was substandard," he added. But this is not a stray incident. Such accidents are a regular phenomenon.

Although, as per the paper, the government has already promulgated over 800 national environmental protection standards and plans to reduce pollution load by 10 per cent and increase forest coverage to 20 per cent, the ground reality is quite different. And it will not be an easy task for the problems are beyond the teething stage.