India has one of four highest CO2 emissions in the world, says report

China contributed 28 per cent of global carbon dioxide emissions in 2013, with its per capita emissions exceeding that of EU’s for the first time, says a report released  by the Global Carbon Project, a group of emissions experts. The annual Global Carbon Budget includes projections for 2014, as well as figures for 2013 by country and per capita.

China was followed by the US at 14 per cent, the EU at 10 per cent and India at 7 per cent of total carbon emissions last year. Globally, every person contributed an average of 5.1 tonnes of CO2, with China’s per capita emissions being ahead of EU’s at 7.2 tonnes. At the current rate, even India is expected to overtake the EU’s per capita number by 2019. Of all four countries (or group of countries), only the EU posted a negative growth in emissions. 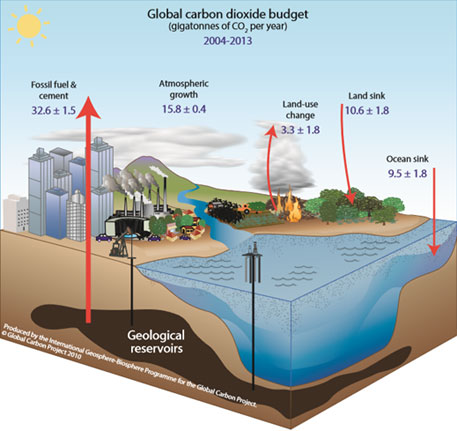 The CO2 emissions from fossil fuel burning and cement production reached their highest ever number in human history, says the Global Carbon Budget 2014. These included emissions from burning of coal, oil, gas and gas flaring. These are expected to increase further by 2.5 per cent in the current year.

To keep average global warming below 2°C, the report shows that total future CO2 emissions must not exceed 1,200 billion tonnes. At the current rate of emissions, this limit will be reached in just 30 years or one generation.

“The human influence on climate change is clear. We need substantial and sustained reductions in CO2 emissions from burning fossil fuels if we are to limit global climate change,” said Corinne Le Quéré, Director of the Tyndall Centre at the University of East Anglia in the UK, co-researcher of the report. “We are nowhere near the commitments necessary to stay below 2°C of climate change, a level that will be already challenging to manage for most countries around the world, even for rich nations,” she said in the university’s press release.

These figures come just days before world nations convene in New York this week, to attempt to broker a global deal on greenhouse gas emissions before the Paris summit in 2015. UN Secretary General Ban Ki-moon has called for pledges on cuts in emissions from all countries in order to tackle climate change.