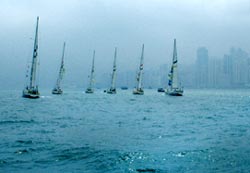 Hong Kong's air pollution hit an alarming high on September 14, with the index rising to over 200. This is the highest it has risen since air quality monitoring was introduced in 1995. Experts lay the blame on China. According to World Health Organization reports, China houses seven of the world's 10 most polluted cities. Most of the pollution cloaking Hong Kong is generated by coal-fired power plants and smokestacks from China's industrial south, as well as traffic fumes from the city's own congested streets (see 'Pollute thy neighbour' Down To Earth, Vol 13, No 6, August 15, 2004). China faces a chronic energy shortage and making the switch from coal-fired plants to cleaner fuel is costly and disruptive.

In Hong Kong, the number of days a year when visibility falls below 8 kilometres has risen from around 50 in 1993 to over 160 last year. The problem will get worse in winter when prevailing northern winds sweep the sulphur dioxide and other toxins belched out of China's smokestacks toward Hong Kong. Meanwhile, doctors have advised asthma sufferers and those with heart disease to stay indoors.