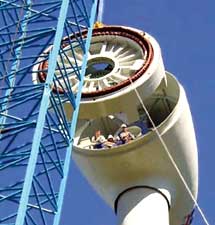 Geoff Gallop, premier of Australia's Western Australia state, announced on February 9, 2005, that six per cent of the power generated in the state by 2010 will be through renewable energy sources. Earlier, the target was one per cent. The aim is to save one million tonnes of greenhouse gas emissions every year.

The move got a mixed response. The Western Australian Coalition (wac) claimed the Labour government's target is unachievable. "They do need to be lifting this level from a very terrible one per cent...but they're talking about 144 more turbines, it's just not going to happen," said Max Trenorden, wac's energy spokesperson. But Matthew Rosser of the Western Australian Sustainable Energy Association says it is a significant step forward.