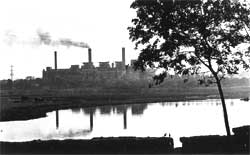 if a scrubbing technique developed by a us research team turns out well, cleaner coal power may soon be possible. Laboratory experiments show that the method is nearly twice as effective as existing techniques at removing sulphur dioxide, a by-product and one of the gases causing acid rain, and can operate at 500c compared to the usual 800c for currently available techniques.

Scrubbers till now have used calcium oxide, which is strongly alkaline, to neutralise acid gases. But Kenneth Klabunde, a chemistry professor, and Shawn Decker, a graduate student -- both at Kansas State University, Manhattan -- have developed a technique to sharply improve the ability of calcium oxide to counteract sulphur dioxide.

Klabunde and Decker worked out a way to produce calcium oxide crystals that are differently shaped and far smaller than commercially available crystals. Then they coated the crystals with iron oxide.

The increased reactivity comes partly from the larger overall surface area presented by the smaller crystals and partly from their shape. "They tend to look spherical but they have a lot of edges," says Klabunde. "The edges give more surface area and higher intrinsic reactivity. We're still trying to understand that."

By coating the crystals with a layer of iron oxide, the particles can remove 94 per cent of sulphur dioxide at 500c. Existing commercial scrubbers remove about 50 per cent at 800c. When sulphur dioxide passes over a bed of coated crystals, it forms iron sulphate. The sulphate then reacts with calcium in the crystals to form calcium sulphate. "The iron oxide is regenerated and reacts again with sulphur dioxide," says Klabunde. "The mysterious part is why it continues to do it after one layer (of calcium oxide) is done. What we're finding is that the particles are almost completely consumed to make calcium sulphate," he adds. He thinks that cracks may form in the surface through which the sulphate can reach calcium oxide deeper in the crystal.

Klabunde's calcium oxide crystals are seven nanometres (nm) in diameter, compared to between 25 and 30 nm for commercial crystals. The team develops them by using a type of reaction called sol gel. They first take calcium methoxide, which is hydrolysed in methanol to form calcium hydroxide. The solvent is then driven off in an autoclave.

The coating is made by dissolving iron oxide in an organic solvent and then placing the calcium oxide crystals in this solution. Iron oxide adsorbs onto the crystal surface, where it is bound by acetyl acetonate, also present in the solvent.

Klabunde considers the stage as early for discussing the economics of a commercial version of the process, but at least one step poses a problem of cost -- the autoclave that is needed to remove the solvent for making calcium oxide. "That's a problem if you're going to make tonnes of crystals. It's a huge thing to build," he says.