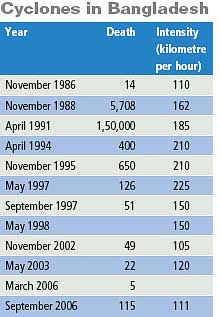 Storms batter Bangladesh every year. Cyclone Sidr killed more than 4,000 people in November, 2007, causing a loss of over us $900 million. It triggered 5-metre high waves that devastated coastal areas, displacing over 2 million people 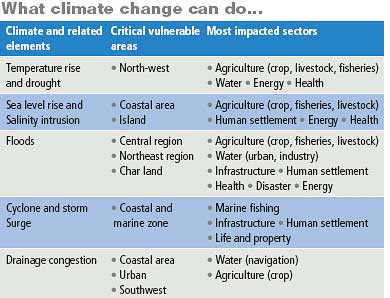 On average, annual floods inundate 20.5 per cent of the country; this can reach about 70 per cent during extreme floods

Bangladesh suffered two major floods in July and August, 2007. According to the department of agriculture, recent floods have affected 39 of the 64 districts in the country, completely damaged 360 thousand hectare (ha) of rice-land and partially affected 180 thousand ha, causing an estimated 0.85 million tonnes loss in rice production

The loss from the floods is estimated to be at us $500 million in paddy, at about us $157 million in roads and bridges, at us $107 million in houses