Cleared at cost of biodiversity 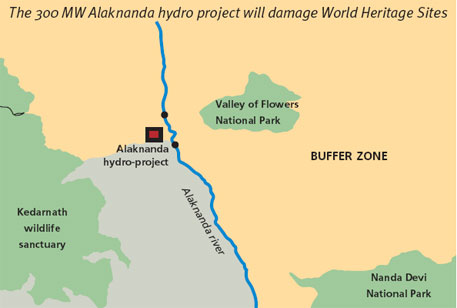 THE UNION environment ministry has given in-principle clearance to a proposed hydro-project on the Alaknanda river, a tributary of the Ganga, in Uttarakhand. The 300 MW project had been rejected twice by the statutory body which recommends forest clearances, the forest advisory committee (FAC). FAC says the project lies in the buffer zone of Nanda Devi Biosphere Reserve (NDBR), a home to many endangered species.

The project includes an 18-metre-high diversion barrage which would be constructed across the river, 3 km downstream of Badrinath town in Chamoli district. It will have a 2.87 km long tunnel and an underground power house near the Khirao Ganga. For the project, developer GMR had sought forest clearance for 60 hectares.

While reviewing the project in May last year, FAC observed it is located in the buffer zone of the reserve, which houses the Nanda Devi National Park and the Valley of Flowers—two core zones also inscribed as UNESCO’s World Heritage Sites. Its decision was based on an interim report of a 2011 study by Dehradun-based Wildlife Institute of India (WII). The study was commissioned by the environment ministry, which asked WII to assess the cumulative impacts of hydro projects in the Alaknanda-Bhagirathi basin. It focused on five projects, including GMR’s. In its report, WII stated the Alaknanda project should not be given clearance as it will seriously hamper the movement of snow leopards, brown bears and other species. Four months later, GMR resubmitted the proposal. FAC again rejected it, saying the company did not submit any new facts. However, the ministry’s forest division overlooked FAC’s recommendation and cleared the project on November 8.

When Union Minister of State for Environment and Forests (independent charge) Jayanthi Natarajan was asked about the clearance, she said the final approval is pending with her ministry. “When the matter comes for final clearance I will take a decision on merits and in the best interests of the environment and the country,” she said.

The WII report says construction of the proposed Alaknanda hydro-electric project is likely to cause severe fragmentation and degradation of wildlife habitats. As the brown bear has its eastern most distribution limits in this area, the proposed hydro-electric and other developmental activities will lead to habitat loss. Cumulative impacts of the developmental activities will affect outstanding universal values of the World Heritage Sites. The conservation status of the core zones in NDBR has been evaluated as excellent, the report adds. Environment and water expert Himanshu Thakkar says the forest clearance does not even acknowledge the highest conservation value that WII accords to the affected area.

“The clearance letter only has the usual conditions that any forest clearance letter states,” he says. He adds, “This is the first time in many years that the ministry has overruled FAC’s recommendation, that too, in the face of such a strong report which was commissioned by the ministry.” Thakkar demands reversal of the decision. GMR hydro-business vice-president Harvinder Manocha alleges, “There were lots of errors and discrepancies in the WII interim report. WII had considered the entire catchment area for our project, while the same was not done for other projects, some of which have received clearance. We have apprised the ministry about it.”

Manocha is hopeful that WII would correct the errors in its final report. WII director P R Sinha says the report was based on findings. “We would submit the final report within the next fortnight.”