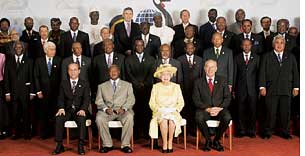 There were substantive discussions on climate change at the three-day Commonwealth Heads of Government Meeting in Uganda. It ended on November 25, however, without agreeing to binding emissions cuts.

Leaders from the 53-member bloc of English-speaking nations came up with resolution called the 'Lake Victoria declaration on climate change', which said that measures to control environmental degradation should not compromise development strategies drawn up by individual nations.

"We firmly believe that no strategy or action to deal with climate change should have the effect of depriving developing countries of the possibility of sustainable economic development," notes the resolution.

The summit, which concluded just before the international conference on climate change in Bali, Indonesia, began was expected to push developing nations towards binding international agreements.

Failing this, the resolution quickly came under criticism from environmental campaign groups. In a statement, Greenpeace said the declaration contained only vague language and lacked any sense of urgency. Criticizing the resolution, leaders of low-lying island nations said, "we are the most vulnerable to the consequences of climate change, particularly rising sea levels." They also complained that the issue of global warming was not given sufficient attention at the summit.