Agencies affected by international food availability and price may require plan differently to cope with the projected slowdown, warns study 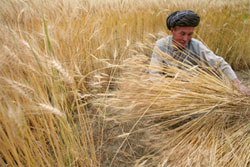 Climate change can cause a slowdown in crop production in the next 20 years, says a new study. The chances of the slowdown—though small—are about 20 times higher than it would be without global warming.

The authors, from Stanford University and the National Center for Atmospheric Research (NCAR), say climate change has substantially increased the prospect that crop production will fail to keep up with rising demand in the next 20 years.

NCAR scientist Claudia Tebaldi and Stanford professor David Lobell used computer models of global climate, as well as data about weather and crops, to calculate the chances that climatic trends would have a negative effect on yields of corn and wheat in the next 20 years.  The study says that while yields would continue to increase but “the slowdown would effectively cut the projected rate of increase by about half at the same time that demand is projected to grow sharply”.

They found that the likelihood of natural climate shifts causing such a slowdown over the next 20 years is only 1 in 200. But with human-induced global warming, the odds jumped to 1 in 10 for corn and 1 in 20 for wheat. The researchers say organizations that are affected by international food availability and price may require plan differently to cope with the projected slowdown. The study appears in this month’s issue of Environmental Research Letters.

MIT study shows another cause for worry

Meanwhile, another study by researchers at MIT shows that air pollution—specifically ozone pollution—can also cause significant damage to crops. The MIT study  looked in detail at global production of four leading food crops — rice, wheat, corn, and soy — that account for more than half the calories humans consume worldwide. The study, which for the first time looks at pollution and climate change together, says effects will vary considerably from region to region. “Agricultural production is very sensitive to ozone pollution. Our findings show how important it is to think about the agricultural implications of air-quality regulations. Ozone is something that we understand the causes of, and the steps that need to be taken to improve air quality,” says Colette Heald, associate professor of civil and environmental engineering at MIT,